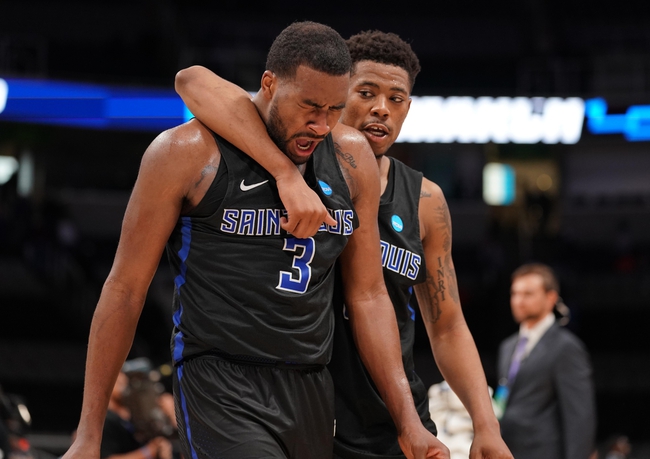 The Saint Joseph’s Hawks will travel to Chaifetz Arena in St. Louis, MO to take on the Saint Louis Billikens this Wednesday in an Atlantic 10 matchup, tipping off at 9:00PM EST.

Defensively, Saint Joseph’s is allowing their opponents to average 79.8 points per game on 46.1% shooting from the field.  The Hawks are grabbing just 4.7 steals per game, leading to a turnover margin of -3.7 on the season.

The Saint Louis Billikens won their last game and improved to 19-8 (8-6 Atlantic 10) on the season after defeating the VCU Rams, 80-62, this past Friday.  Saint Louis jumped out to a 41-27 lead at the half and coasted from there, building a 72-49 lead with 7:51 remaining in regulation. The Billikens shot 57.1% from the field and 44.4% from three-point range.  Javonte Perkins led the charge for Saint Louis with 25 points, 7 rebounds, a steal and a block in the game.

Defensively, Saint Louis is holding their opponents to 66.3 points per game on 40.8% shooting from the field.  The Billikens are also grabbing 7.7 steals per game and have a turnover margin of 1.1 on the season.

Saint Joseph’s comes into the game ranking 33rd in the country in made three-pointers per game and 198th in team FT% at 70.2% on the season.  Saint Louis ranks 67th in steals per game and 89th in the land in assist/turnover ratio at 1.12.

Saint Louis has won their last two home games by an average of 16.5 points and although this is a big number to cover I think they will.  Look for the Billikens defense to shut down an inept Saint Joseph’s offense in this one. I’m taking Saint Louis to win big again at home and cover the spread.