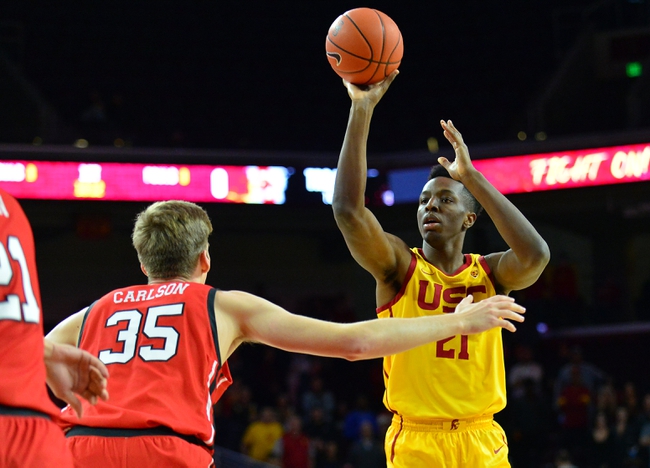 Where to watch: ESPNU Stream College Basketball all season on ESPN+. Sign up now!

The USC Trojans will travel to the Jon M. Hunstman Center in Salt Lake City, UT to take on the Utah Utes this Sunday in a PAC12 showdown, tipping off at 6:00 EST.

Defensively, USC is allowing their opponents to score 66.9 points per game on 38.9% shooting from the field.  The Trojans are grabbing 6.6 steals per game and have a turnover margin of -1.4 on the season.

The Utah Utes have lost three games in a row and have dropped to 14-12 (5-9 PAC12) after being defeated by the UCLA Bruins, 69-58, this past Thursday.  Utah went down 33-21 at the half and couldn’t mount a rally as UCLA controlled the game throughout. The Utes shot 43.8% from the field and 25.0% from three-point range.  Alfonso Plummer led the way for Utah with 16 points and a steal in the game.

Defensively, Utah is allowing their opponents to average 69.8 points per game on 43.8% shooting from the field.  The Utes scoring margin of 0.8 is 208th in the country.

USC comes in into the game as an elite rim protecter, ranking 19th in the country with 5.1 blocks per game.  The Trojans also have the 20th ranked scoring defense in the land. Utah ranks 130th in FG% and 194th in scoring defense.

USC got a four point win at home against Utah in their first contest back in January and after coming up just short in Boulder against the Buffaloes, I expect the Trojans to come into this game aggressively.  I think USC controls the pace of this game and dominates on the glass on their way to the road victory. I’m taking USC in this one.

Get Premium Picks Start Winning Now »
The pick in this article is the opinion of the writer, not a PickDawgz site consensus.
Previous Pick
Creighton vs. Butler - 2/23/20 College Basketball Pick, Odds, and Prediction
Next Pick
Washington State vs. Stanford - 2/23/20 College Basketball Pick, Odds, and Prediction