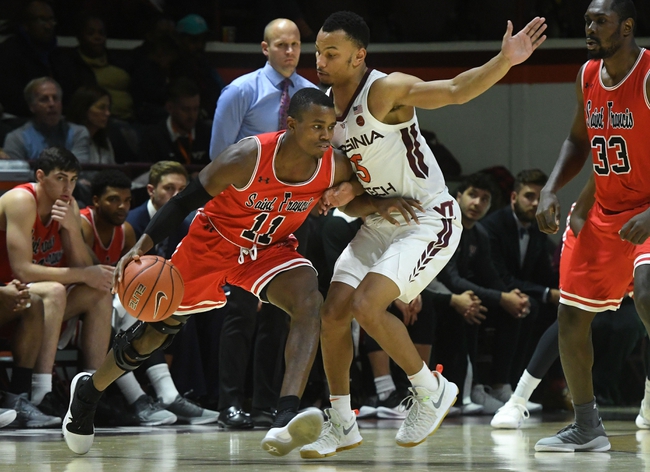 Where to Watch: http://necfrontrow.com/home Stream College Basketball all season on ESPN+. Sign up now!

The Long Island University Sharks will travel to DeGol Arena to take on the St. Francis (PA) Red Flash this Sunday afternoon in College Basketball action.

The Long Island University Sharks snapped their 2-game losing streak and dropped to 13-15 (8-7 NEC) on the season after defeating the Fairleigh Dickinson Knights, 86-81, this past Friday. In a tight back-and-forth game in the 2nd half, Long Island University was able to seal victory late after a Julian Batts three-pointer gave the Sharks an 84-80 lead with :15 seconds left in regulation. Long Island University shot 44.4% from the field and 44.4% from beyond the arc in the victory. Leading the way for the Sharks was Tyrn Flowers who had a double-double with 20 points, 14 rebounds, 3 assists, 2 blocks, and 2 steals.

Defensively, Long Island University is allowing their opponents to average 77.1 ppg on 43.9% shooting from the field. The Sharks have a rebound margin of -5.5 and a turnover margin of -0.1.

The St. Francis (PA) Red Flash won their 6th straight game and improved to 18-8 (11-4 NEC) on the season after defeating the Robert Morris Colonials, 86-71, this past Tuesday. St. Francis (PA) was outstanding offensively against the Colonials and had no trouble pulling away for the victory after taking a 50-33 lead early in the 2nd half. St. Francis (PA) shot 50.0% from the field and 45.0% from beyond the arc in the victory. Leading the way for the Red Flash was Isaiah Blackmon who had 30 points, 7 rebounds, 3 assists, and 4 steals.

Defensively, St. Francis (PA) is allowing their opponents to average 72.2 ppg on 44.8% shooting from the field. The Red Flash have a rebound margin of 3.8 and a turnover margin of 1.5.

Long Island University comes into this game ranked 41st in scoring offense, however, the Sharks have struggled defensively and currently rank just T-326th in scoring defense and 231st in defensive FG%.

St. Francis (PA) has been led by their offense this season which comes into this match-up ranked 28th in scoring offense, 46th in FG%, and 21st 3P-FG%.

Long Island University was able to pick up an impressive 86-81 win at home earlier this season against St. Francis (PA), however, the Red Flash have been lights out as of late and as I just don’t see St. Francis (PA) having any problems putting up 85-95 points in this one, I’m taking St. Francis (PA) to cover this large home spread. Good Luck!