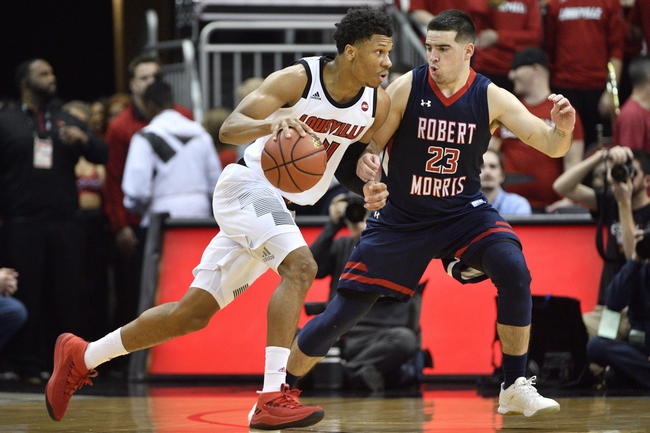 Where to Watch: http://necfrontrow.com/home Stream College Basketball all season on ESPN+. Sign up now!

The Robert Morris Colonials will travel to the Rothman Center to take on the Fairleigh Dickinson Knights this Sunday afternoon in College Basketball action.

The Robert Morris Colonials snapped their 2-game losing streak and improved to 16-13 (12-4 NEC) on the season after defeating the Mount St. Mary’s Mountaineers, 68-60, this past Friday. Robert Morris trailed by a 33-28 margin at halftime, however, the Colonials were excellent offensively in the 2nd half and was able to pull out the win after finishing the final 1:50 of regulation on a 7-1 run. Robert Morris shot 47.1% from the field and won the turnover battle by a 14-8 margin in the victory. Leading the way for the Colonials was Josh Williams who had 22 points, 4 rebounds, 2 assists, 1 block, and 2 steals.

Defensively, Robert Morris is allowing their opponents to average 67.1 ppg on 44.9% shooting from the field. The Colonials have a rebound margin of -0.4 and a turnover margin of 2.0.

Defensively, Fairleigh Dickinson is allowing their opponents to average 74.8 ppg on 45.0% shooting from the field. The Knights have a rebound margin of -2.9 and a turnover margin of 0.2.

Robert Morris comes into this game ranked 241st in scoring offense, 48th in 3P-FG%, and 115th in scoring defense.

Fairleigh Dickinson comes into this match-up ranked 154th in scoring offense, 300th in scoring defense, and 280th in defensive FG%.

Fairleigh Dickinson has struggled ATS at home and although the Knights were able to pick up a 72-71 win on the road just last week against the Colonials, I just can’t trust their defense that has really struggled on the season. Robert Morris is a solid shooting team, especially from beyond the arc, and as I they’ve had success on the road against the Knights, I’m taking Robert Morris to cover this small road spread. Good Luck!