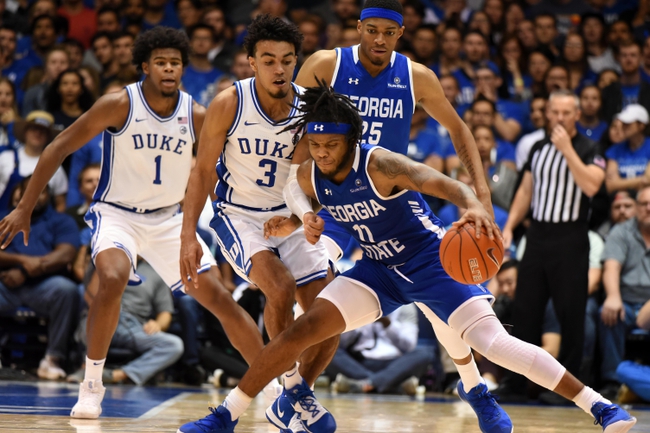 The Georgia State Panthers will travel to Strahan Coliseum to take on the Texas State Bobcats this Saturday night in College Basketball action.

The Georgia State Panthers had their 3-game winning streak snapped and dropped to 18-10 (11-6 Sun Belt) on the season after being defeated by the UT Arlington Mavericks, 70-62, this past Thursday. Georgia State held a 44-30 lead early in the 2nd half, however, struggled defensively down the stretch and couldn’t fight back after the Mavericks took a 63-58 lead with 3:59 left in regulation. Georgia State shot just 35.3% from the field and 24.0% from beyond the arc in the loss. Leading the way for the Panthers was Kane Williams who had 21 points, 7 rebounds, 5 assists, 1 block, and a steal.

Defensively, Georgia State is allowing their opponents to average 71.3 ppg on 39.6% shooting from the field. The Panthers have a rebound margin of 0.4 and a turnover margin of 2.0.

The Texas State Bobcats won their 3rd straight game and improved to 18-10 (11-6 Sun Belt) on the season after defeating the Georgia Southern Eagles, 70-55, this past Thursday night. Texas State dominated the Eagles on both ends of the court from the start and easily cruised to victory in the 2nd half after taking a 42-20 lead at halftime. Texas State shot 52.7% from the field while holding Georgia Southern to just 14.3% shooting from beyond the arc. Leading the way for the Bobcats was Nijal Pearson who had 20 points, 5 rebounds, 3 assists, and a block.

Defensively, Texas State is holding their opponents to an average of 63.3 ppg on 40.0% shooting from the field. The Bobcats have a rebound margin of 0.9 and a turnover margin of 3.6.

Texas State is a talented team that has a 13-3 record at home this season, however, I don’t love this match-up for the Bobcats as the Panthers have an explosive offense with multiple players able to do damage. Georgia State was able to put up 81 points agianst the Bobcats earlier this season and although I don’t expect the Panthers to put up that many in this one, I just don’t see how Texas State will be able to keep up with them with really only one scoring threat in Nijal Pearson. I’m taking Georgia State with the points and might even put something small on the M/L for the Panthers. Good Luck.