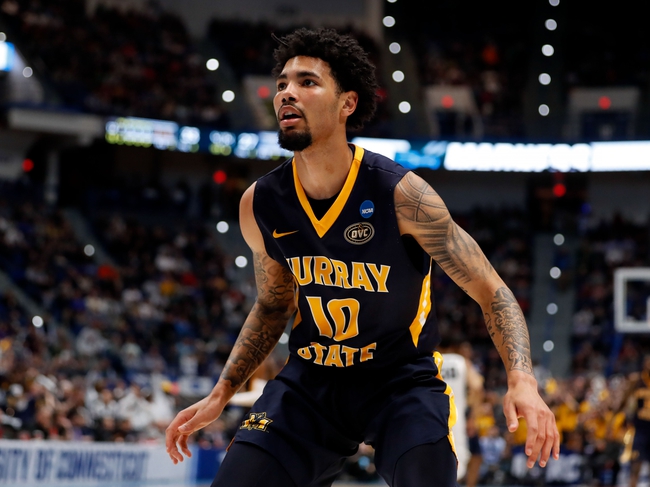 The Murray State Racers will travel to the Vadalabene Center to take on the SIU-Edwardsville Cougars this Saturday afternoon in College Basketball action.

The Murray State Racers dropped to 19-8 (12-3 OVC) on the season after being defeated by the Eastern Illinois Panthers, 63-60, this past Thursday. Murray State looked like they would be able to put this one in cruise control after taking a 50-23 lead with 11:45 left in regulation, however, the wheels fell off on both ends of the court for the Racers the rest of the way and the Panthers completed the incredible comeback after a Josiah Wallace hit a game-winning three-pointer at the buzzer. Murray State shot 43.4% from the field and 30.8% from beyond the arc in the loss. Leading the way for the Racers was Tevin Brown who had 13 points, 5 rebounds, 4 assists, and a block.

Defensively, Murray State is holding their opponents to an average of 64.9 ppg on 39.9% shooting from the field. The Racers have a rebound margin of 7.3 and a turnover margin of -1.1.

The SIU-Edwardsville Cougars lost their 2nd straight game and dropped to 7-21 (4-11 OVC) on the season after being defeated by the Austin Peay Governors, 78-60, this past Thursday. SIU-Edwardsville struggled offensively against the Governors and couldn’t fight back after a 10-0 Austin Peay run gave the Governors a 72-54 lead with just 4:00 minutes left in regulation. SIU-Edwardsville shot just 38.9% from the field and 25.0% from beyond the arc in the loss. Leading the way for the Cougars was Shamar Wright who had 6 points, 8 rebounds, and 2 steals.

Defensively, SIU-Edwardsville is allowing their opponents to average 73.5 ppg on 43.9% shooting from the field. The Cougars have a rebound margin of -1.5 and a turnover margin of -0.4.

The Racers are 12-11-2 ATS on the season and are 2-1 ATS in their last three games against SIU-Edwardsville. The Cougars are 3-9 ATS n their last 12 games and just 3-7 ATS at home on the season.

Murray State comes into this game ranked 50th in scoring offense, 12th in FG%, and 62nd in scoring defense.

SIU-Edwardsville has struggled on both ends of the court this season and come into this game ranked 289th in scoring offense, 230th in FG%, and 283rd in scoring defense.

Murray State has struggled a bit on the road this season, however, the Racers are the far better team in this one and as I think the Racers come into this game ready to play a full 40 minutes after what happened at Eastern Illinois, I’m taking the Racers to cover this double-digit road spread. Good Luck.