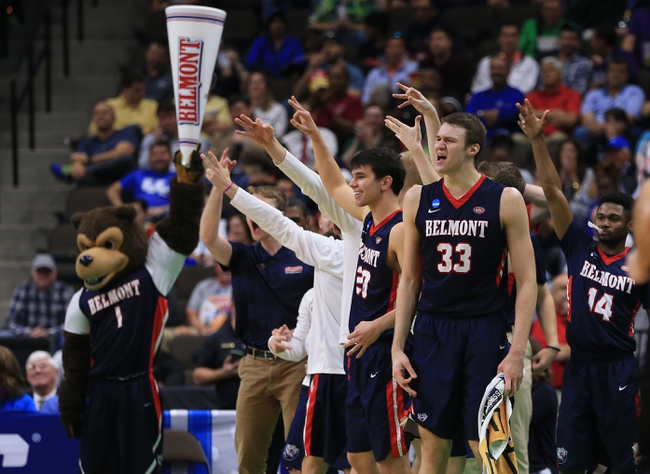 The Belmont Bruins will travel to McBrayer Arena in Richmond, KY to take on the Eastern Kentucky Colonels this Saturday in an OVC showdown, tipping off at 7:00 EST.

The Belmont Bruins are winners of 7 games in a row, improving to 21-7 (12-3 OVC) on the season after defeating the Morehead State Eagles, 80-67, this past Thursday.  Belmont opened up a 34-25 point lead at the half and after letting Morehead State pull within 3 in the second half, the Bruins rallied to a 77-61 lead with 2:54 left in regulation.  Belmont shot 53.3% from the field and 43.5% from beyond the arc. Grayson Murphy’s near triple-double led the way for the Bruins. He had 16 points, 10 rebounds, 8 assists and 2 steals in the game.

Defensively, Belmont is allowing their opponents to average 68.5 points per game on 41.4% shooting from the field.  The Bruins are taking 7.5 steals per game leading to a turnover margin of 2.5 on the season.

The Eastern Kentucky Colonels won their last contest and improved to 14-14 (11-4 OVC) on the season after defeating the Tennessee State Tigers, 83-62, this past Thursday.  The Colonels came out firing, grabbing a 30-3 lead in the first 8 minutes of play. From there, Eastern Kentucky was able to coast to the victory, never having the lead dip below double digits for the remainder of the game.  The Colonels shot 49.2% from the field and 28.6% from three-point range. Ty Taylor II led the way for Eastern Kentucky with 22 points, 5 rebounds and a steal.

Defensively, Eastern Kentucky is allowing their opponents to average 76.7 points per game on 45.8% shooting from the field.  The Colonels are grabbing 9.4 steals per game leading to a turnover margin of 4.6.

Belmont beat Eastern Kentucky by 29 at home in their first outing, but the Colonels play well at home (9-3 on the season).  I expect this game to be much closer but Eastern Kentucky won’t be able to keep up offensively with the Bruins. I am laying the points with Belmont on the road in this one.