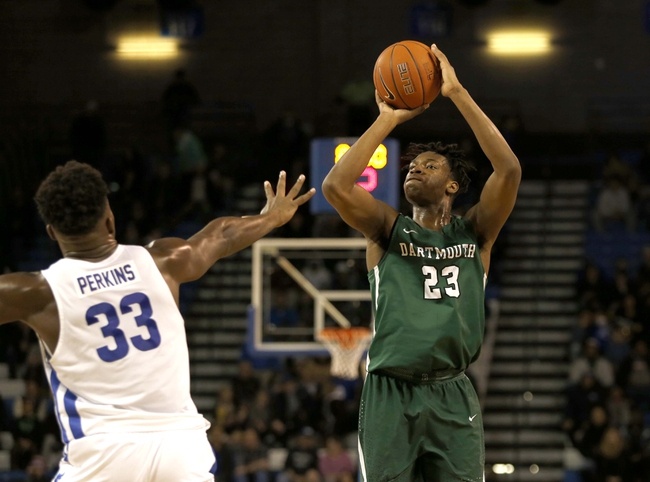 The Princeton Tigers will travel to Edward Leede Arena to take on the Dartmouth Big Green this Saturday night in College Basketball action.

The Princeton Tigers dropped to 11-11 (6-3 Ivy) on the season after being defeated by the Harvard Crimson, 61-60, on Friday night. Princeton struggled offensively agianst Harvard and couldn’t fight back after the Crimson took a 61-57 lead with 3:27 left in regulation. Princeton shot just 34.4% from the field and 28.0% from beyond the arc in the loss. Leading the way for the Tigers was Jaelin Llewellyn who had 15 points, 5 rebounds, 2 assists, and 2 steals.

Defensively, Princeton was allowing their opponents to average 70.7 ppg on 47.0% shooting from the field. The Tigers had a rebound margin of 1.1 and a turnover margin of -1.0.

The Dartmouth Big Green won their 3rd straight game and improved to 10-14 (3-6 Ivy) on the season after defeating the Pennsylvania Quakers, 66-59, on Friday night. Dartmouth was outstanding defensively agianst the Quakers and was able to pull away after a 7-0 Big Green run gave Dartmouth a 60-50 lead with just 1:44 left in regulation. Dartmouth held Penn to 36.7% shooting from the field and outrebounded the Quakers by a 40-31 margin in the victory. Leading the way for the Big Green was Aaryn Rai who had 13 points, 4 rebounds, 2 assists, and a block.

Defensively, Dartmouth was allowing their opponents to average 64.3 ppg on 42.0% shooting from the field. The Big Green had a rebound margin of 1.2 and a turnover margin of -0.9.

Dartmouth has been led by their defense which ranks 47th in scoring defense, 128th in defensive FG%, and 151st in rebound margin.

After a hot start to conference play, Princeton has cooled off splitting their last 6 games including losing 2 of their last 3 road games. Dartmouth can struggle scoring the basketball, however, they’re an outstanding defense team that can really slow down a game. Princeton had no trouble taking care of business agianst Dartmouth at home, however, as I think the Big Green can duplicate their defensive effort that we saw on Friday against Penn, I'm going to take the Big Green and the point in this one. Good Luck!