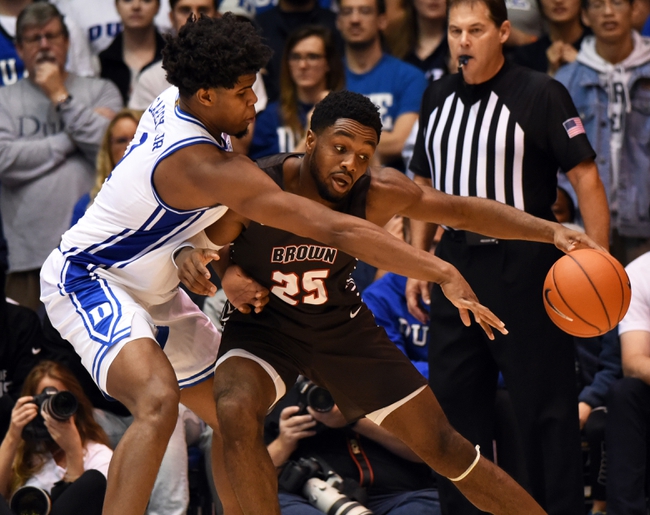 The Brown Bears will travel to Newman Arena to take on the Cornell Big Red this Saturday night in College Basketball action.

The Brown Bears improved to 13-9 (6-3 Ivy) on the season after defeating the Columbia Lions, 72-66, on Friday night. Brown trailed by 43-32 margin early in the 2nd half, however, the offensive was excellent down the stretch and was able to hold of the Lions after taking a 70-66 lead with :46 seconds left in regulation. Brown shot 43.8% from the field and outrebounded Columbia by a 40-28 margin in the victory. Leading the way for the Bears was Brandon Anderson who had 16 points, 2 rebounds, 1 assist, and 2 steals.

Defensviely, Brown was allowing their opponents to average 69.9 ppg on 42.8% shooting from the field. The Bears had a rebound margin of 4.5 and a turnover margin of -2.1.

The Cornell Big Red lost their 4th straight game and dropped to 5-17 (2-7 Ivy) on the season after being defeated by the Yale Bulldogs, 81-80 in 2OT, on Friday night. Cornell gave the Bulldogs all they could handle throughout the game and took a late lead in the 2nd OT, however, Yale was able to escape with a win after August Mahoney hit the game-winning lay-up for the Bulldogs with just :02 seconds left in the 2nd OT. Cornell shot 50.8% from the field and 38.9% from beyond the arc in the loss. Leading the way for the Big Red was Terrance McBride who had 27 points, 5 rebounds, 5 assists, 1 block, and a steal.

Defensively, Cornell was allowing their opponents to average 70.3 ppg on 45.0% shooting from the field. The Big Red had a rebound margin of -2.6 and a turnover margin of 0.7.

Brown has been playing well as of late winning 6 of their last 7 games including an impressive recent win at Penn. Cornell has been solid at home this season, posting a 5-4 record, however, it’s going to be tough for the Big Red to bounce back on Saturday after logging a bunch of minutes against Yale on Friday and I'm going to roll with Brown covering this small road spread. Good Luck!