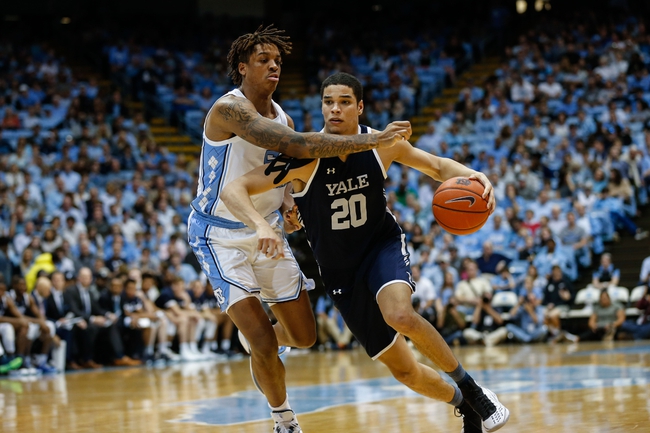 The Yale Bulldogs are travelling to Levien Gymnasium in New York, NY to take on the Columbia Lions this Saturday in an Ivy League showdown, tipping off at 7:00 EST,

The Yale Bulldogs won their last game, improving to 19-6 (7-2 Ivy League) on the season by defeating the Cornell Big Red, 81-80, in a double OT thriller.  Tied at 60-60, the Bulldogs fought on into the the extra period and met the Big Red even at 69-69. It took an August Mahoney layup in the final seconds to seal the deal for Yale.  The Bulldogs shot 46.2% from the field and 33.3% from beyond the arc. A triple-double from Jordan Brumner led the way as he had 14 points, 11 rebounds, 10 assists and a steal.

Defensively, Yale is allowing their opponents to average 71.2 points per game on 44.3% shooting from the field.  The Bulldogs are grabbing 5.5 steals per game and have a turnover margin of -0.4 on the season.

The Columbia Lions have lost 8 games in a row, dropping to 6-19 (1-8 Ivy League) after being defeated by the Brown Bears, 72-66, this past Friday.  Columbia held a lead at halftime but saw it slowly dwindle in the final minutes as Brown pulled away with the victory. The Lions shot 46.4% from the field and 31.6% from three-point range. Mike Smith led the way for Columbia with 22 points, 3 rebounds and 3 assists.

On defense, Columbia is allowing their opponents to average 71.2 points per game on 44.3% shooting per game.  The Lions are grabbing 5.5 steals per game and have a turnover margin of -0.4.

I think Yale adds to Columbia's strggules of late and has no problem covering this high spread on the road.  I'm laying the points, taking Yale to cover.