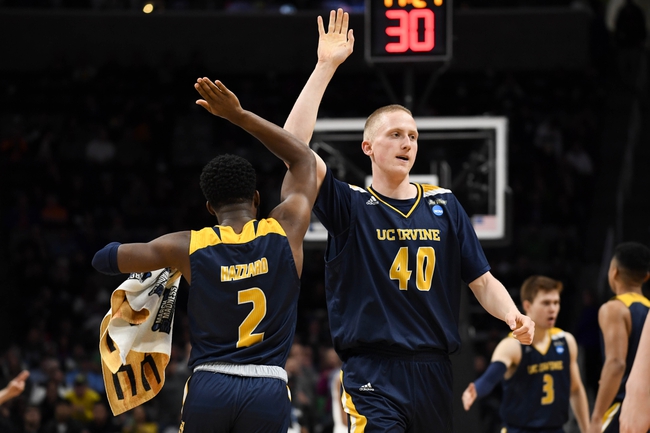 Where to Watch: bigwest.org/watch/ Stream College Basketball all season on ESPN+. Sign up now!

The UC Irvine Anteaters will travel to the Matadome in Northridge, CA to take on the CSU Northridge Matadors this Saturday in a Big West showdown, tipping off at 10:00PM EST.

The UC Irvine Anteaters have won three games in a row, improving to 18-10 (10-2 Big West) on the season after defeating the Long Beach State 49ers, 70-55, this past Wednesday.  The Anteaters struggled early but still held a 26-23 lead at the half. UC Irvine found their rhythm in the second half though and opened up a 56-40 lead with 6:57 remaining in regulation and coasted to victory from there.  The Anteaters shot 44.8% from the field and 27.8% from three-point range. Tommy Rutherford led the way for UC Irvine with 16 points, 9 rebounds and a block.

Defensively, UC Irvine has held their opponents to 64.9 points per game on 38.1% shooting from the field.  The Anteaters are nabbing 6.5 steals per game but still have a turnover margin of -2.0 on the season.

The CSU Northridge Matadors lost their last game and dropped to 11-16 (6-5 Big West) after being defeated by the UC Davis Aggies, 110-98, this past Saturday.  The Matadors found themselves down 47-41 at the half and fought to bring it to 60-58 with 14:10 remaining in regulation, however that was as close as they could get as the Aggies ran up 63 points in the second half to get the victory.  CSU Northridge shot 58.9% from the field and 52.6% from downtown, but it wasn’t enough as UC Davis bettered them in both categories with 59.3% form the field and 60.0% from three-point range. Lamine Diane led the way for the Matadors with 30 points, 4 rebounds, 6 assists, 2 steals and a block.

The Anteaters enter the game ranked 2nd in the nation in rebound margin at 9.4.  UC Irvine also ranks 9th in FG% defense. The Matadors turnover margin is good for 86th in the country and also rank 45th in assist/turnover ratio at 1.21.

This is the first matchup between these two teams this season and on paper it look like UC Irvine has the advantage.  CSU Northridge has struggled at home against quality opponents and I think that will continue here. I think UC Irvine controls the glass and shuts down the Matadors offense so I’m laying the points with the Anteaters on the road.