The Georgia Southern Eagles will travel to Strahan Coliseum to take on the Texas State Bobcats this Thursday night in College Basketball action.

The Georgia Southern Eagles had their 3-game winning streak snapped and dropped to 16-11 (10-6 Sun Belt) on the season after being defeated by the Appalachian State Mountaineers, 62-57, this past Saturday. Georgia Southern held a 48-38 lead with just 8:09 left in regulation, however, the Panthers offense struggled down the stretch and allowed the Mountaineers to pick up victory after they closed out the final 6:37 of the game on 19-7 run. Georgia Southern shot just 11.1% from beyond the arc and committed 16 turnovers in the loss. Leading the way for the Eagles was Quan Jackson who had 17 points, 4 rebounds, 1 assist, and 4 steals.

Defensively, Georgia Southern is allowing their opponents to average 70.8 ppg on 43.8% shooting from the field. The Eagles have a rebound margin of -2.9 and a turnover margin of 3.6.

The Texas State Bobcats won their 2nd straight game and improved to 17-10 (10-6 Sun Belt) on the season after defeating the Arkansas State Red Wolves, 69-64, this past Saturday. Texas State was outstanding in the 1st half against the Red Wolves and held a comfortable lead throughout the 2nd half after going into halftime with a 31-13 lead. Texas State shot 42.6% from the field and outrebounded Arkansas State by a 40-30 margin in the victory. Leading the way for the Bobcats was Nijal Pearson who had 27 points, 7 rebounds, 2 assists, and 3 steals.

Defensively, Texas State is holding their opponents to an average of 63.6 ppg on 40.0% shooting from the field. The Bobcats have a rebound margin of 0.5 and a turnover margin of 3.9.

Georgia Southern comes into this game ranked 68th in scoring offense, 65th in three-pointers made per game, and 19th in turnover margin.

Texas State has been led by their defense this season and come into this game ranked 37th in scoring defense, 43rd in defensive FG%, and 15th in turnover margin.

Texas State is a great defensive team that has played well at home this season, however, the Bobcats are very limited on the offensive end outside of Nijal Pearson. Georgia Southern was able to pick up a win agianst the Bobcats at home earlier this season and although their offense stalled out recently agianst Appalachian state, I think this ends up being a competitive game that comes down a possession so I’m going to roll with Georgia Southern and the points. Good Luck! 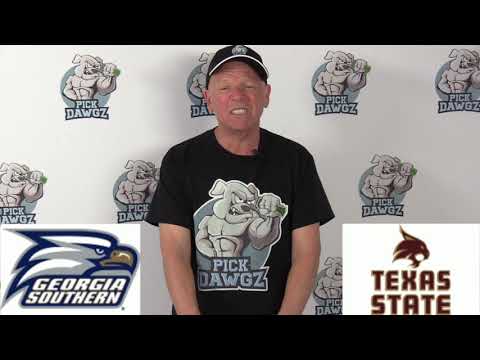