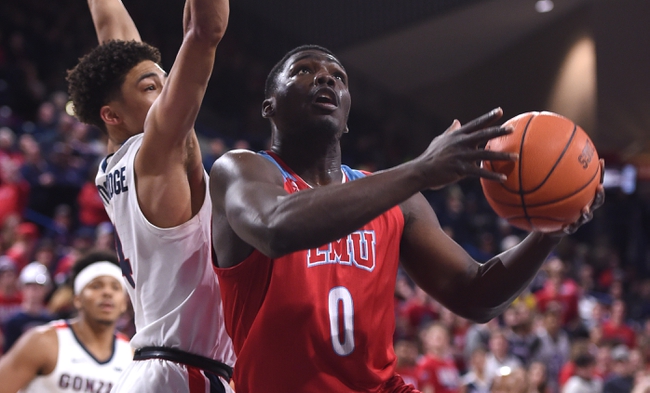 Where to Watch: Patriot League Network Stream College Basketball all season on ESPN+. Sign up now!

The Loyola Marymount Lions will be travelling to the University Credit Union Pavillion in Moraga, CA to take on the Saint Mary’s Gaels this Thursday night in a WCC showdown, tipping off at 11:00PM ET.

The Loyola Marymount Lions won their last contest and improved to 9-17 (3-9 WCC) on the season after defeating the Santa Clara Broncos this past Saturday.  It was a tight first half seeing the Lions take a 28-27 lead into the half. After going back & forth in the second half, Loyola Marymount was finally able to pull away, grabbing a 55-48 advantage with 2:21 left in regulation that would prove to be enough.  The Lions shot 46.2% from the field and 29.4% from beyond the arc. Eli Scott led the way for Loyola Marymount, putting up 19 points, 3 rebounds, 5 assists and 3 steals.

Defensively, Loyola Marymount is allowing their opponents to average 68.5 ppg on 44.5% shooting from the field.  The Lions are averaging 6.3 steals per game and have a turnover margin of -0.8.

The Saint Mary’s Gaels won their last contest, improving to 21-6 (84- WCC) on the season after defeating the Pacific Tigers 71-63 this past Saturday.  The Gaels never received a threat from the Tigers as they opened up an early lead and led the entire game. Pacific pulled within seven at 46-39 with 13:25 remaining in regulation, but that was as close as they would get as Saint Mary’s cruised to the victory.  The Gaels shot 54.9% from the field and 50.0% from beyond the arc. Dan Fotu led the charge for Saint Mary’s, hitting a double-double with 16 points and 10 rebounds as well as 2 assists.

Defensively, Saint Mary’s is allowing their opponents to score 66.2 ppg on 45.2% shooting from the field.  Averaging 6.8 steals per game has helped the Gaels to a strong turnover margin of 1.9 on the season.

Saint Mary’s won by 11 earlier in the season at Loyola, however that game got out of hand quickly and Loyola Marymount didn’t mount much of a comeback.  I think the trends continue here and unless Saint Mary’s shoots lights out the Lions give them a closer game so I will take the points on the road in this one.