The Hofstra Pride will travel to the Daskalakis Athletic Center to take on the Drexel Dragons this Thursday night in College Basketball action.

The Hofstra Pride won their 6th straight game and improved to 20-7 (11-3 CAA) on the season after defeating the UNC Wilmington Seahawks, 78-64, this past Saturday. Hofstra dominated UNC Wilmington from the start in this one and had no trouble securing the victory after going into halftime with a 48-27 lead. Hofstra shot 46.0% from the field and outrebounded UNC Wilmington by a 36-26 margin in the victory. Leading the way for the Pride was Isaac Kante who had a double-double with 23 points, 14 rebounds, and a steal.

Defensively, Hofstra is allowing their opponents to average 69.2 ppg on 44.3% shooting from the field. The Pride have a rebound margin of 1.2 and a turnover margin of 2.2.

The Drexel Dragons lost their 3rd consecutive game and dropped to 13-14 (6-8 CAA) on the season after being defeated by the Elon Phoenix, 75-70, this past Saturday. Drexel went into halftime with a 37-31 lead, however, the Dragons struggled defensively in the 2nd half and couldn’t fight back after Elon took a 65-61 lead with 2:05 left in regulation. Drexel shot 46.8% from the field, however, allowed Elon to shoot 47.9% from the field and 50.0% from beyond the arc in the loss. Leading the way for the Dragons was Camren Wynter who had 23 points, 4 rebounds, 6 assists, and a steal.

Defensively, Drexel is allowing their opponents to average 70.3 ppg on 44.4% shooting from the field. The Dragons have a rebound margin of 2.6 and a turnover margin of -3.2.

Hofstra comes into this game led by their offense that ranks 46th in scoring offense, 108th in FG%, and 69th in 3P-FG%.

Drexel comes into this match-up ranked T-232nd in scoring offense, 198th in scoring defense, and 253rd in defensive FG%.

Hofstra has been one of the better teams ATS this season, coming into this game with an overall 19-7 record, and was able to cover in their match-up at home against Drexel earlier this season. Drexel is tough on their home court, however, as I think the Hofstra offense will have no trouble putting up points against the Dragons defense, I’m taking the Pride to cover this road spread. Good Luck! 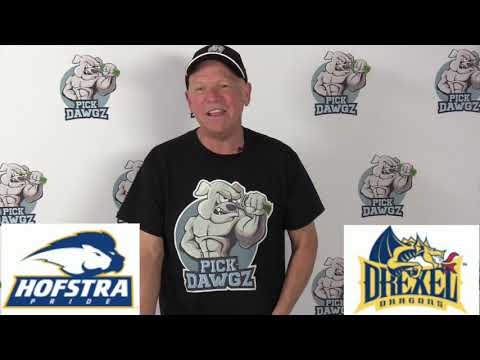