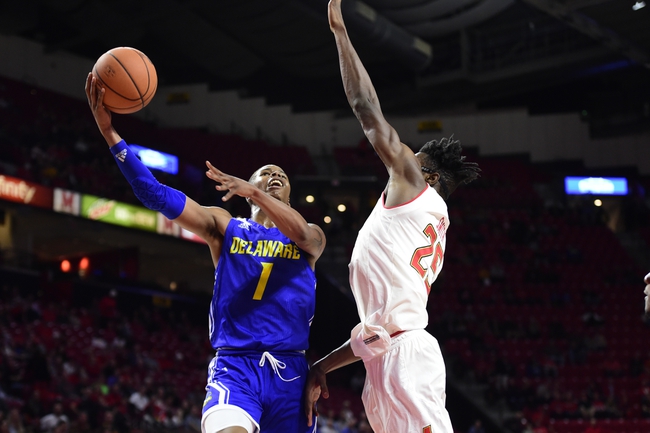 The Northeastern Huskies will travel to the Bob Carpenter Center to take on the Delaware Blue Hens this Thursday night in College Basketball action.

The Northeastern Huskies won their 2nd straight game and improved to 13-13 (7-7 CAA) on the season after defeating the Charleston Cougars, 65-51, this past Saturday. Northeastern went into halftime tied at 33-all with the Cougars, however, the Huskies were outstanding defensively in the 2nd half and pulled away after a 15-0 Huskies run gave Northeastern a 60-43 lead with 5:49 left in regulation. Northeastern shot 48.1% from the field and outrebounded Charleston by a 36-24 margin in the victory. Leading the way for the Huskies was Jordan Roland who had 17 points, 5 rebounds, 3 assists, and 2 steals.

Defensively, Northeastern is holding their opponents to an average of 66.5 ppg on 45.4% shooting from the field. The Huskies have a rebound margin of 1.5 and a turnover margin of 1.0.

The Delaware Blue Hens had their 7-game winning streak and dropped to 19-8 (9-5 CAA) on the season after being defeated by the William & Mary Tribe, 81-77, this past Saturday. Delaware went into halftime with a 43-36 lead, however, the Blue Hens struggled defensively in the 2nd half and couldn’t fight back after William & Mary took a 70-63 lead with 3:26 left in regulation. Delaware allowed William & Mary to shoot 58.2% from the field and committed 12 turnovers in the loss. Leading the way for the Blue Hens was Nate Darling who had 36 points, 3 rebounds, 4 assists, 1 block, and a steal.

Defensively, Delaware is allowing their opponents to average 71.1 ppg on 43.0% shooting from the field. The Blue Hens have a rebound margin of 0.3 and a turnover margin of -1.1.

Delaware head been led by their offense this season and currently rank 83rd in scoring offense, 15th in FG%, and 46th in 3P-FG%.

Northeastern is coming an impressive win agianst Charleston, however, this is a team that hasn’t had much success on the road as of late, losing their last 4 roads games in which one of them was against the 8-20 UNC Wilmington Skyhawks. Delaware picked up a nice road win against Northeastern earlier this season and between the fact that the Blue Hens are 9-2 at home and that I think they have a strong enough offense to have success agianst the tough Northeastern defense, I’m taking Delaware in this pick-em. Good Luck!