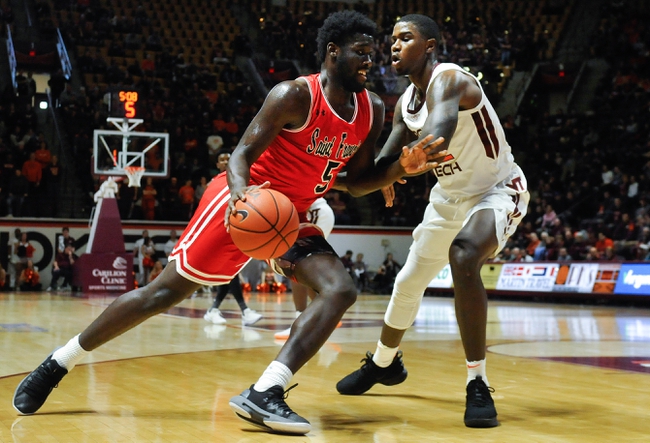 Where to watch: http://necfrontrow.com/home Stream College Basketball all season on ESPN+. Sign up now!

The Robert Morris Colonials will travel to DeGol Arena to take on the St. Francis (PA) Red Flash this Tuesday night in College Basketball action.

The Robert Morris Colonials has their 6-game winning streak snapped and dropped to 15-12 (11-3 NEC) on the season after being defeated by the Fairleigh Dickinson Knights, 72-71, this past Saturday. Robert Morris took a 71-70 lead with just :08 seconds left in regulation off a pair of FT’s by AD Bramah, however, couldn’t hang on for the victory after the Knights Kaleb Bishop was able to putback a Jahlil Jenkins miss as time expired. Robert Morris shot 44.6% from the field and 28.6% from beyond the arc in the loss. Leading the way for the Colonials was AJ Bramah who had 17 points, 6 rebounds, 1 assist, and a steal.

Defensively, Robert Morris is allowing their opponents to average 66.7 ppg on 44.8% shooting from the field. The Colonials have a rebound margin of 0.0 and a turnover margin of 2.0.

The St. Francis (PA) Red Flash won their 5th straight game and improved to 17-8 (10-4 NEC) on the season after defeating the Mountain St. Mary’s Mountaineers, 70-55, this past Saturday. St. Francis (PA) trailed by a 29-20 margin at halftime, however, dominated the Mountaineers on both ends of the court in the 2nd half and pulled away for the victory after taking a 61-53 lead with 3:21 left in regulation. Leading the way for the Red Flash was Mark Flagg who had 16 points, 8 rebounds, 1 assist, 3 blocks, and a steal.

Defensively, St. Francis (PA) is allowing their opponents to average 72.2 ppg on 44.7% shooting from the field. The Red Flash have a rebound margin of 3.6 and a turnover margin of 1.4.

Robert Morris comes into this game ranked 239th in scoring offense, 103rd in scoring defense, and 271st in defensive FG%.

St. Francis (PA) has been their offense this season which comes into this game ranked 29th in scoring offense, 53rd in FG%, and 33rd in 3P-FG%.

St. Francis (PA) has won their last 8 games against Robert Morris and as I think their offense at home will have no trouble putting up points agianst the Robert Morris defense, I’m taking the Red Flash to cover this mid-range home spread.