What can be said about Evansville? They defeated the, at the time #1 Kentucky Wildcats, and now have lost thirteen straight games and have not won a conference game all season. Evansville’s most recent loss came to Loyola-Chicago at home, 73-66. Drake has dropped two games in a row. Their most recent loss was to Missouri State by 35 points on the road, 97-62. 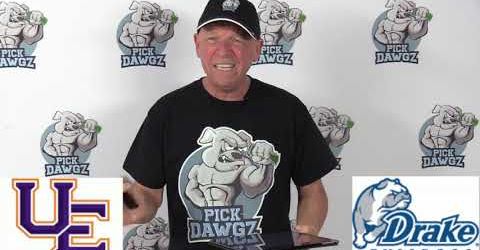 Evansville has struggled badly on the offensive side of the ball, as the Aces score 68.3 points per game. G K.J. Riley leads the team in scoring, as he averages 12.8 PPG on 48.1% FG shooting. Evansville’s defense has also played poorly recently; on the season they allow 74.5 points per game to the opposition. Evansville also earns 32.5 rebounds, 12.2 assists, 2.5 blocks, and 4.7 steals per game.

Drake, despite their recent struggles, still own a +2.4 point differential on the season. The Bulldogs score 70.1 points per game on 46.2% FG shooting as a team. F Liam Robbins leads the team in scoring, averaging 13.7 PPG. Drake allows 67.7 points per game to the opposition. Drake also earns 33.6 rebounds, 15.6 assists, 3.6 blocks, and 5.7 steals per game.

This one is tough, as although Evansville has been terrible in MVC action, Drake just lost by 35. I can not feel confident on either side of this game, as 12 points is a lot to lay with a team that has struggled lately. Then again, 12 points do not seem like enough to take Evansville either, as they did lose to Drake by 23 at home earlier this season. With all of this being said, I will take Evansville plus the 12 points, due to the fact that I see improvements in their game in their most recent losses, but I would stay clear from this one.