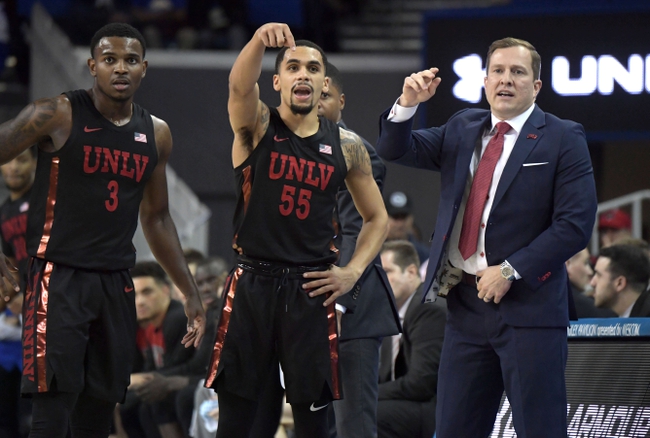 The UNLV Rebels will travel to Dreamstyle Arena to take on the New Mexico Lobos this Saturday night in College Basketball action.

The UNLV Rebels dropped to 12-14 (7-6 Mountain West) on the season after being defeated by the Nevada Wolfpack, 82-79 in OT, this past Wednesday night. UNLV got a jumper from Bryce Hamilton late in regulation to force OT, however, the Rebels offense struggled in OT and UNLV couldn’t fight back after Nevada took an 81-79 lead with 1:21 left in OT. UNLV shot just 35.8% from the field and 23.1% from beyond the arc in the victory. Leading the way for the Rebels was Bryce Hamilton who had 23 points, 9 rebounds, 1 assist, 1 block, and a steal.

Defensively, UNLV is allowing their opponents to average 71.1 ppg on 42.9% shooting from the field. The Rebels have a rebound margin of 7.0 and a turnover margin of -1.5.

The New Mexico Lobos dropped to 17-9 (6-7 Mountain West) on the season after being defeated by the 4th ranked San Diego State Aztecs, 82-59, this past Tuesday. New Mexico trailed by just a 35-33 margin at halftime, however, had no answers on either end of the court in the 2nd half and couldn’t fight back after San Diego State took a 60-44 lead with just 7:53 left in regulation. New Mexico shot just 35.4% from the field and 20.7% from beyond the arc in the loss. Leading the way for the Lobos was Vante Hendrix who had 20 points, 4 rebounds, 1 assist, and 4 steals in 25 minutes from off the bench.

Defensively, New Mexico is allowing their opponents to average 76.1 ppg on 44.8% shooting from the field. The Lobos have a rebound margin of 0.6 and are averaging 8.0 steals per game.

UNLV comes into this game ranked 173rd in scoring offense, 230th in scoring defense, and 18th in rebound margin.

New Mexico has lost 6 of their last 8 games which included a 21-point loss at UNLV and although their an impressive 14-1 at home this season, as I think UNLV’s offense will be able to find success and the Lobos have really struggled since Carlton Bragg Jr was dismissed, I think the play here is to take UNLV and the points. Good Luck!