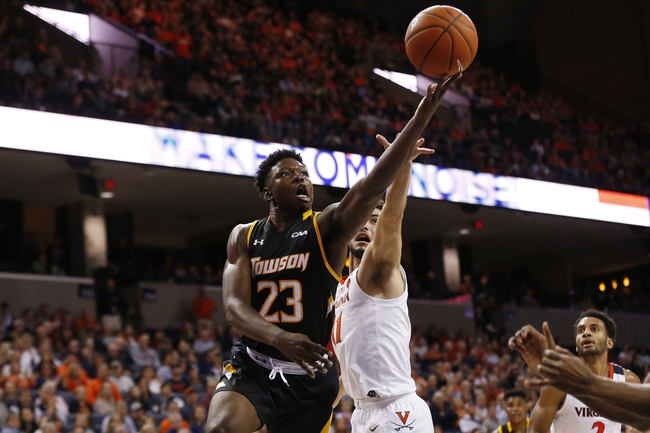 The Towson Tigers will travel to the JMU Convocation Center to take on the James Madison Dukes this Saturday night in College Basketball action.

The Towson Tigers won their 2nd straight game and improved to 15-11 (8-5 CAA) on the season after defeating the NCCAA Regent University Royals, 71-55, this past Wednesday. Towson led by just a 31-25 margin at halftime against the Royals, however, the Tigers were able to pull away early in the 2nd half after a 18-4 run gave Towson a 57-40 lead with 8:44 left in regulation. Towson shot 46.0% from the field and outrebounded the Royals by a 42-25 margin in the victory. Leading the way for the Tigers was Nakye Sanders who had 18 points, 7 rebounds, and an assist.

Defensively, Towson is allowing their opponents to average 66.8 ppg on 40.8% shooting from the field. The Tigers have a rebound margin of 4.6 and a turnover margin of -0.5.

The James Madison Dukes lost their 2nd straight game and dropped to 9-15 (2-11 CAA) on the season after being defeated by the Delaware Blue Hens, 80-78, this past Saturday. James Madison led by a 66-59 margin with just 6:21 left in regulation, however, the Dukes couldn’t secure the much needed victory after Delaware’s Nate Darling hit a game-winning jumper for the Blue Hens with just :02 seconds left in regulation. James Madison shot 44.4% from the field and 33.3% from beyond the arc in the loss. Leading the way for the Dukes was Deshon Parker who had 23 points, 2 rebounds, and 5 assists.

Defensively, James Madison is allowing their opponents to average 77.0 ppg on 43.5% shooting from the field. The Dukes have a rebound margin of 0.0 and a turnover margin of -0.7.

Towson comes into this game led by their defense which ranks 104th in scoring defense, 73rd in defensive FG%, and 54th in rebound margin.

James Madison had had success agianst Towson recently at home, however, I just have a hard time trusting the Dukes defense that has really struggled this season. Towson wasn’t impressive in their recent game, however, this is a solid defensive team that limited James Madison to just 61 points in their first outing this season and as the Dukes are just 1-5 overall at home in their last 6 games, I think Towson does enough to cover this small road spread.