The Brown Bears will travel to The Palestra to take on the Pennsylvania Quakers this Friday night in College Basketball action.

The Brown Bears won their 4th straight game and improved to 11-8 (4-2 Ivy League) on the season after defeating the Harvard Crimson, 72-71, this past Saturday night. In a tight back and forth contest in the 2nd half, Brown was able to pull of a stunning victory after the Bears Tamenang Choh was able to convert a three-point play with less than a second left in regulation. Brown shot 42.6% from the field and 87.5% (28-32) from the free-throw line in the victory. Leading the way for the Bears was Brandon Anderson who had 22 points, 4 rebounds, 1 assist, and 2 steals.

Defensively, Brown is allowing their opponents to average 70.1 ppg on 42.9% shooting from the field. The Bears have a rebound margin of 4.9 and a turnover margin of -2.3.

The Pennsylvania Quakers won their 5th consecutive game and improved to 12-7 (4-2 Ivy League) on the season after defeating the Cornell Big Red, 79-73, this past Sunday. Pennsylvania was solid from the field and was able to pull away late after taking a 75-69 lead with just 1:10 left in regulation. Pennsylvania shot 53.6% from the field and committed just 7 turnovers in the victory. Leading the way for the Quakers was AJ Brodeur who had 10 points, 9 rebounds, 8 assists, and 2 blocks.

Defensively, Pennsylvania is allowing their opponents to average 71.7 ppg on 42.2% shooting from the field. The Quakers have a rebound margin of -1.1 and a turnover margin of -0.9.

Pennsylvania has been led by their offense this season which ranks 85th in scoring offense, 57th in FG%, and 65th in three-pointers made per game.

Brown has had a lot of success at home this season, however, the same can’t be said on the road as the Bears come into this game with just a 1-6 record on the road. Pennsylvania has been impressive at home this season, including a 66-59 victory agianst Temple, and as I think the AJ Brodeur and the Quakers offense will be too much for the Bears, I’m taking Pennsylvania to cover this mid-range spread. 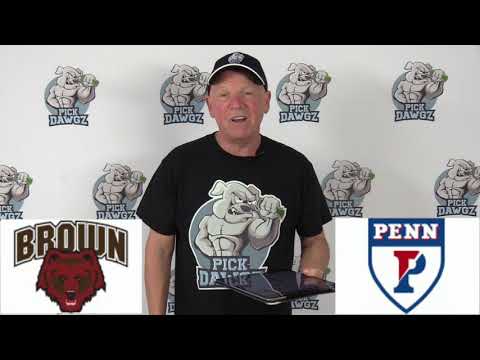