The Manhattan Jaspers will travel to the Hynes Athletics Center to take on the Iona Gaels this Friday night in College Basketball action.

The Manhattan Jaspers won their 3rd straight game and improved to 11-10 (7-5 MAAC) on the season after defeating the Quinnipiac Bobcats, 65-63, this past Sunday. Manhattan allowed Quinnipiac to fight back to tie the game late after leading by a 51-40 margin midway through the 2nd half, however, the Jaspers were still able to secure the victory after Tykei Greene hit a game-winning lay-up with just :01 second left in regulation. Manhattan shot 42.9% from the field and won the turnover battle by a 25-10 margin in the victory. Leading the way for the Jaspers was Warren Williams who had 14 points, 4 rebounds, 3 blocks, and 2 steals. 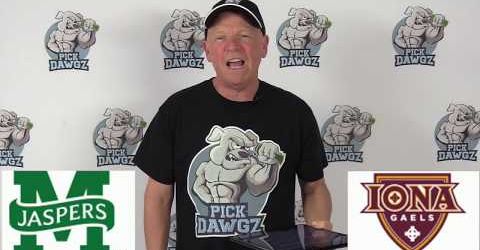 Defensively, Manhattan is holding their opponents to an average of 64.0 ppg on 39.7% shooting from the field. The Jaspers have a rebound margin of -1.0 and a turnover margin of 1.8.

The Iona Gaels won their 2nd consecutive game and improved to 7-12 (5-7 MAAC) on the season after defeating the Fairfield Stags, 78-54, this past Sunday. Iona was outstanding offensively agianst Fairfield and had no trouble securing the victory after taking a 65-46 lead with just 6:51 left in regulation. Iona shot 57.4% from the field and 52.6% from beyond the arc in the victory. Leading the way for the Gaels was Isaiah Ross who had 23 points, 1 rebound, 1 assist, and a steal.

Defensively, Iona is allowing their opponents to average 72.4 ppg on 43.8% shooting from the field. The Gaels have a rebound margin of -2.7 and a turnover margin of -0.6.

Manhattan is a defensively minded team and although scoring offense rank just 325th in College Basketball, the Jaspers come into this game ranked 43rd in scoring defense & 40th in defensive FG%.

Iona has struggled on both ends of the court this season as the Gaels come into this match-up ranked 254th in scoring offense, 238th in FG%, and 260th in scoring defense.

Manhattan dominated Iona at home less than two weeks ago in a 72-49 victory and although I expect this to be a closer game, I think the Jaspers defense will once again give the Iona offense trouble and that the Japers at worst, cover with the points. Good Luck!