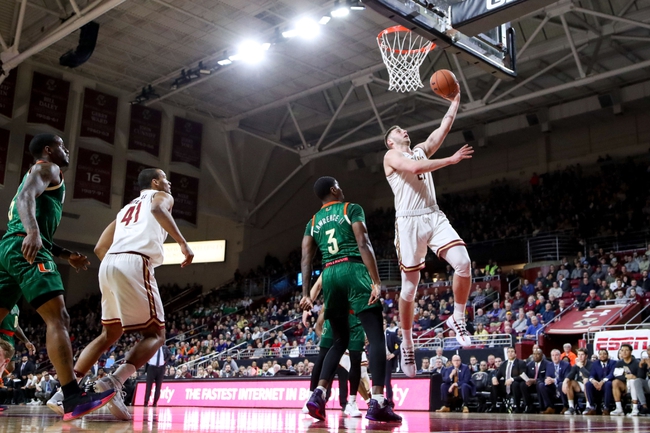 The Boston College Eagles and the Miami Hurricanes meet in ACC college basketball action from the Watsco Center on Wednesday night.

The Boston College Eagles will be looking to emerge from a traffic jam in the middle of the ACC standings, sitting at 6-7 in conference play after alternating wins and losses in each of their last 6 games following a 77-73 win over Virginia Tech last time out. Steffon Mitchell led the Eagles with 21 points along with team-highs of 15 rebounds and 6 assists for the double-double while Jay Heath added 18 points with 3 threes and 4 assists as two of BC’s four double-digit scorers in the winning effort. Derryck Thornton had 10 points for the Eagles but still leads Boston College in scoring and assists with 13 points and 3.5 assists per game while Heath and Nic Popovic are averaging double-digit scoring this season as well. Mitchell leads BC in rebounding with 8.7 rebounds per game this season. As a team, Boston College is averaging 64.9 points on 40.5% shooting from the field, 30% from behind the arc and 69.8% from the foul line while allowing opponents to average 68.4 points on 42.7% shooting from the field and 33.2% from the 3-point line this season.

The Miami Hurricanes will look to break out of a tie at the bottom of the ACC standings, sitting at 3-10 in conference play with a 99-81 loss to Florida State last time out. Isaiah Wong led the ‘Canes with 23 points on 8 of 12 shooting while Anthony Walker had a team-high 5 rebounds. Chris Lykes, Dejan Vasiljevic and Kameron McGusty make up the trio of double-digit scorers for Miami this season with Lykes leading the way with 15.3 points and a team-high 2.4 assists per game. Sam Waardenburg leads the Hurricanes in rebounding with 6.3 rebounds per game this season. As a team, Miami is averaging 71.5 points per game on 43.7% shooting from the field, 33.1% from behind the 3-point line and 74.9% from the foul line while allowing opponents to average 75.3 points on 45.9% shooting from the field and 35.1% from behind the arc this season.

I’d like to think that Miami will step up their game at home as it’s where their two wins in their last ten games has come. However, while Boston College has had issues with consistency, the one thing Miami has done consistently as of late is lose, and a lot of those games haven’t been close. Boston College has not only covered in three straight, but the Eagles have won back-to-back road games outright and I think this is a decent spot for the Eagles to add to those numbers. Give me Boston College and the points here.