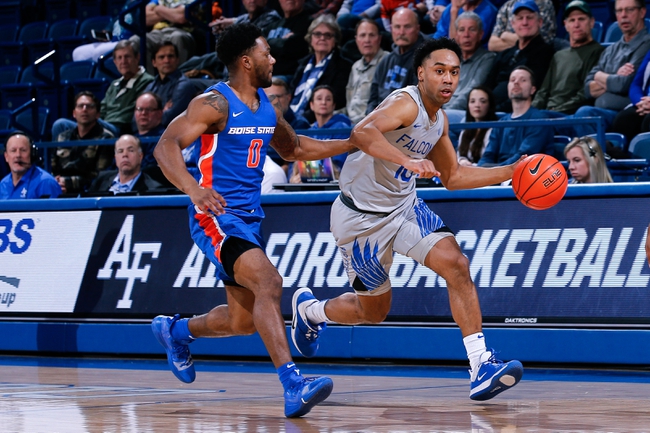 The Air Force Falcons will be out to snap a six-game losing streak to start the climb out of the Mountain West basement following an 89-74 loss to San Diego State last time out. Chris Joyce led the Falcons with 23 points including 5 threes and a team-high 5 assists while Lavelle Scottie added 16 points with 13 rebounds and 4 assists for the double-double. Scottie leads Air Force with an average of 15.3 points and 5.7 rebounds per game while Ryan Swan and A.J. Walker round out the trio of double-digit scorers for Air Force this season. As a team, Air Force is averaging 74.3 points per game on 45.6% shooting from the field, 38% from 3-point range and 74.8% from the foul line while allowing their opposition to average 74.9 points per game on 46.6% shooting from the field and 37.7% from 3-point range this season.

The Boise State Broncos will try to get out of a logjam near the top of the Mountain West standings despite a 70-61 loss to Utah State last time out. Justinian Jessup led the Broncos with 20 points including 5 rebounds and 3 threes while Alex Hobbs had 15 points with 6 rebounds as the only other scorer in double figures for Boise State in the loss. Derrick Alston had 4 points but still leads Boise State’s group of double-digit scorers with 18.5 points and 3.1 assists per game while RJ Williams has 11.4 points and a team-high 8 rebounds per game. Jessup and Abu Kigab each have a double-digit average in the scoring department as well. As a team, Boise State is averaging 77.8 points per game on 45.6% shooting from the field, 35.2% from behind the 3-point line and 74.6% from the foul line while allowing opposition to average 70.1 points on 44.8% shooting from the field and 29.1% from behind the arc this season.

Part of me would like to take the points with Air Force, but the issue is that the Falcons have looked terrible during this losing streak, as the Falcons have been giving up points left and right, and more often than not, the offense hasn’t held up their end of the bargain as.5 of Air Force’s 6 losses during the stretch have come by double digits. Boise State has been strong against the number at home all year long and the Broncos are outscoring their opponents by 19.8 points per game at home this season. Give me Boise State in a game that could end up getting ugly.