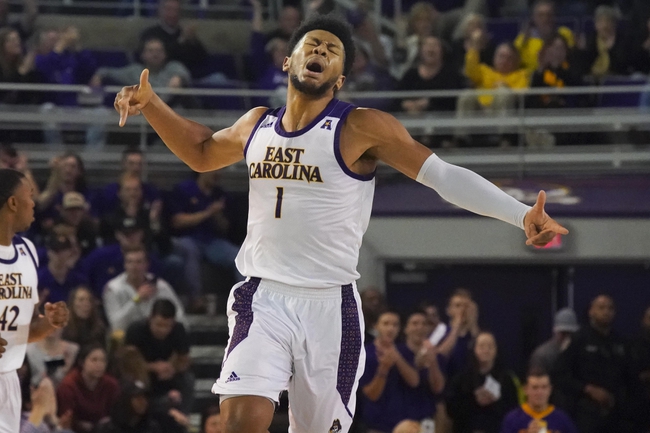 The East Carolina Pirates will travel to Devlin Fieldhouse to take on the Tulane Green Wave this Saturday night in College Basketball action.

The East Carolina Pirates lost their 3rd consecutive game and dropped to 9-14 (3-7 AAC) on the season after being defeated by the UCF Knights, 68-64, this past Thursday. East Carolina struggled defensively agianst the Knights and couldn’t fight back after UCF took a 62-45 lead with just 5:17 left in regulation. East Carolina shot 41.1% from the field, however, allowed UCF to shoot 48.0% from the field and 43.5% from beyond the arc in the loss. Leading the way for the Pirates was Tristen Newton who had 23 points, 3 rebounds, 4 assists, and 3 steals.

Defensively, East Carolina is allowing their opponents to average 71.3 ppg on 42.7% shooting from the field. The Pirates have a rebound margin of 1.4 and a turnover margin of -0.5.

The Tulane Green Wave lost their 6th straight game and dropped to 10-12 (2-8 AAC) on the season after being defeated by the 25th ranked Houston Cougars, 75-62, this past Thursday. Tulane was overwhelmed on both ends of the court agianst the talented Cougars and trailed by double-digits throughout the 2nd half after going into halftime trailing by a 39-2 margin. Tulane allowed Houston to shoot 53.6% from the field and was outrebounded by the Cougars by a 37-27 margin in the loss. Leading the way for the Green Wave was Teshaun Hightower who had 17 points, 5 rebounds, 2 assists, 1 block, and 4 steals.

Defensively, Tulane is holding their opponents to an average of 69.6 ppg on 45.6% shooting from the field. The Green Wave have a rebound margin of -7.4 and a turnover margin of 4.5.

East Carolina has lost 6 of their last 7 games and currently rank just 256th in scoring offense and 231st in scoring defense.

Tulane has lost 10 of their last 12 games and have been led by their defense that ranks 190th in scoring defense, T-41st in steals per game, and 11th in turnover margin.

East Carolina has yet to win a game on the road this season (0-7), however, the Pirates were competitive at Wichita State earlier this season in a 6-point loss and have had success in this match-up as East Carolina is 7-1 ATS against Tulane in their last 8 games. Tulane’s defense can create turnovers, however, the Green Wave rank just 301st in defensive FG% on the season and as I think Tulane won’t have an answer for the Pirates Jayden Gardner, I’m taking East Carolina to do enough with points in this one to cover. Good Luck!