The Kentucky Wildcats and the Tennessee Volunteers meet in SEC college basketball action from the Thompson-Boling Arena on Saturday afternoon.

The Kentucky Wildcats will look to build on an 80-72 win over Mississippi State in their last outing. Nick Richards led the Wildcats with 27 points on 7 of 10 shooting with a 13 of 15 mark from the foul line and a team-high 11 rebounds while Immanuel Quickley had 21 points with a 14 of 14 mark from the foul line and E.J. Montgomery added 12 points with 8 rebounds and 3 steals to round out the trio of double-digit scorers for Kentucky in the winning effort. Ashton Hagans added 6 points with a team-high 6 assists while Tyrese Maxey added 8 points with 5 assists. Quickley leads Kentucky in scoring with an average of 14.6 points per game while Richards leads the Wildcats in rebounding with 8.3 rebounds per game and Hagans leads Kentucky in assists with 7 assists per game this season. As a team, Kentucky is averaging 75.2 points per game on 45.9% shooting from the field, 31.9% from behind the arc and 78.3% from the foul line this season.

The Tennessee Volunteers will look to build on a 69-68 win over Alabama last time out. John Fulkerson led the Vols with 22 points on 8 of 9 shooting with a 6 of 8 mark from the foul line while Jordan Bowden added 20 points with 7 rebounds and 6 steals and Yves Pons added 14 points with 14 rebounds for the double-double to round out the scoring in double figures for Tennessee in the winning effort. Santiago Vescovi added 8 points with 8 rebounds, a team-high 5 assists and 3 steals as well in the winning effort. Bowden leads Tennessee in scoring with an average of 13 points per game while Fulkerson leads the Vols in rebounding with 5.9 rebounds per game and Lamonte Turner leads Tennessee in assists with 7.1 assists per game this season. As a team, Tennessee is averaging 66.6 points per game on 42.9% shooting from the field, 30.6% from behind the arc and 74.7% from the foul line this season.

This line feels fishy to me, as Kentucky is the much better team playing much better ball right now, but we’re only being asked to lay a bucket. But if this line is a trap, I’m biting. Like I said, Kentucky is the much better team and I’ve learned lately, anytime you get Kentucky and a low line or points in conference play, you take them. Tennessee still hasn’t been a great team all year long, and while this seems like it would be a marquee win for the Vols, I just don’t see it. Give me Kentucky and lay the bucket here. 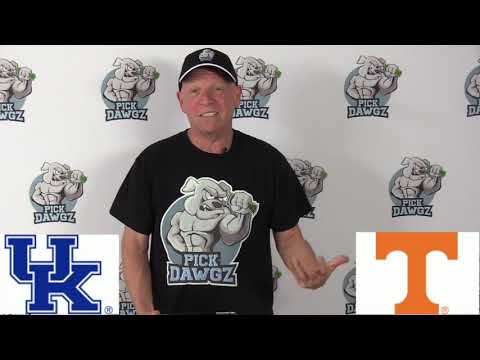