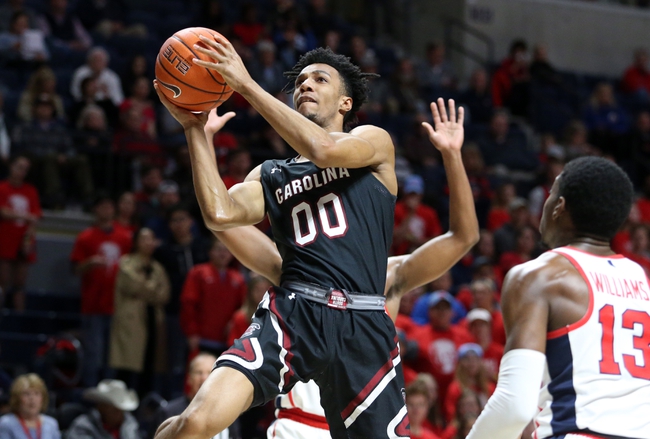 The Texas A&M Aggies and the South Carolina Gamecocks meet in SEC college basketball action from the Colonial Life Arena on Saturday afternoon.

The Texas A&M Aggies will look for some consistency after alternating wins and losses in each of their last six games following a 68-51 win over Missouri last time out. Josh Nebo led the Aggies with 18 points along with 6 rebounds while Quenton Jackson added 15 points with a team-high 3 assists and Wendell Mitchell added 12 points with 3 threes, a pair of steals and a pair of blocks. Emanuel Miller added 10 points with a team-high 13 rebounds to round out the group of double-digit scorers for Texas A&M while Savion Flagg added 10 rebounds of his own as well in the victory. Nebo leads Texas A&M with an average of 11.8 points and 6.9 rebounds per game while Flagg leads the Aggies in assists with 2.6 assists per game this season. As a team, South Carolina is averaging 60.9 points per game on 38.9% from the field, 25.7% from behind the arc and 67.6% from the foul line this season.

The South Carolina Gamecocks will look to rebound from an 84-70 loss to Ole Miss in their last outing. Jermaine Cousinard led the Gamecocks with 28 points on 8 of 18 shooting with 3 threes and 3 assists while Maik Kotsar added 19 points with team-highs of 8 rebounds, 3 steals and 3 blocks along with 4 assists as the only other double-digit scorer for South Carolina in the losing effort. T.J. Moss added a team-high 5 assists as well in the defeat. A.J. Lawson was held to just 5 points but he still leads South Carolina in scoring with an average of 13.5 points per game while Kotsar leads the Gamecocks in rebounding with 6.6 rebounds per game and Couisnard leads South Carolina in assists with 2.9 assists per game this season. As a team, South Carolina is averaging 71.4 points per game on 44.1% shooting from the field, 31.3% from behind the arc and 61% from the foul line this season.

The points with the Aggies are tempting as Texas A&M has a tendency to play tighter defensive games and bring teams down to their level. However, despite South Carolina’s frustrating showing against Ole Miss, the fact is that South Carolina has been playing the better basketball lately and are averaging 73.2 points per game at home while the Aggies are putting up just 61 points per game at home this season. I just think this is the game where Texas A&M’s lack of offense comes back to bite them, so I’ll lay the points with the Gamecocks here.