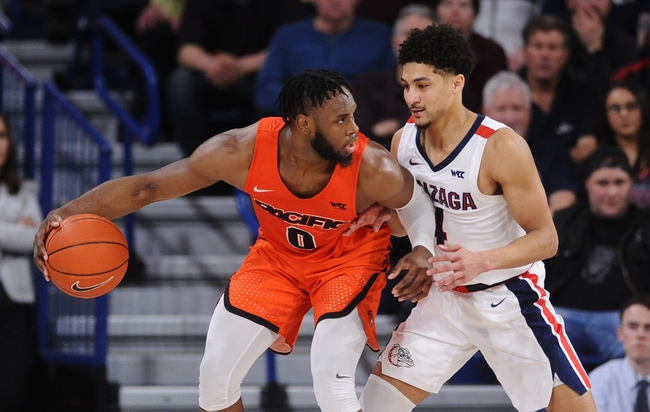 The Pepperdine Waves will travel to the Alex G. Spanos Center to take on the Pacific Tigers this Saturday night in College Basketball action.

The Pepperdine Waves won their 2nd straight game and improved to 13-11 (6-4 WCC) on the season after defeating the Santa Clara Broncos, 91-77, this past Thursday. Pepperdine was outstanding on the offensive end against the Broncos and had no trouble securing the victory after taking a 79-61 lead with 7:35 left in regulation. Pepperdine shot 50.0% from the field and 39.1% from beyond the arc in the victory. Leading the way for the Waves was Colbey Ross who had 23 points, 4 rebounds, 9 assists, and a steal.

Defensively, Pepperdine is allowing their opponents to average 77.7 ppg on 46.8% shooting from the field. The Waves have a rebound margin of -1.9 and a turnover margin of 1.7.

The Pacific Tigers won their 3rd straight game and improved to 18-8 (6-4 WCC) on the season after defeating the San Francisco Dons, 60-48, this past Thursday. Pacific was outstanding defensively against the Dons in this one and had no trouble securing the victory after going into halftime with a 29-13 lead. Pacific shot 41.5% from the field while holding San Francisco to just 27.6% from the field and 12.5% from beyond the arc in the victory. Leading the way for the Tigers was Jahlil Tripp who had 8 points, 20 rebounds, 2 assists, 1 block, and a steal.

Defensively, Pacific is holding their opponents to an average of 63.9 ppg on 40.5% shooting from the field. The Tigers have a rebound margin of 8.7 and a turnover margin of -0.5.

Pepperdine has been solid offensively this season as they rank 40th in scoring offense, 60th in 3P-FG%, and 1st in FT%, however, the Waves defense has been no stranger when it comes to giving up points as Pepperdine comes into this game ranked just 330th in scoring defense & 329th in defensive FG%.

Pacific’s offense is ranked just 227th in scoring offense, however, the Tigers have been great defensively as they come into this game ranked 48th in scoring defense, 66th in defensive FG%, and 7th in rebound margin.

Both of these teams have been playing well as of late, however, Pacific is 5-1 ATS vs. Pepperdine in their last six match-ups and as I think the Pacific’s strong defense will have success against the Pepperdine’s high-scoring offense at home, I’m taking the Tigers to cover this small home spread. Good Luck!