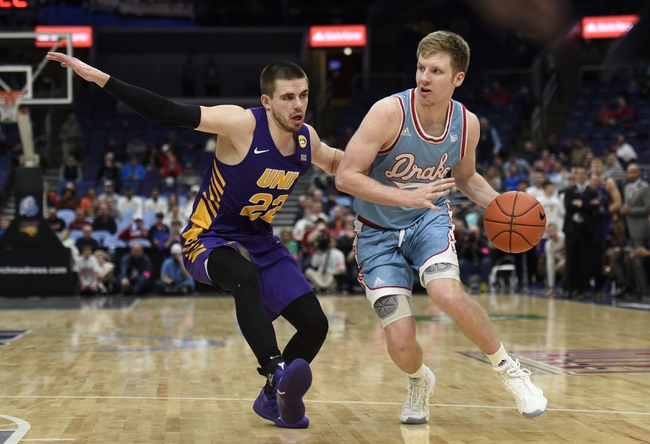 The Drake Bulldogs and the Northern Iowa Panthers meet in MVC college basketball action from the McLeod Center on Saturday afternoon.

The Drake Bulldogs will look to build off of a 73-60 win over Bradley last time out. Liam Robbins led the Bulldogs with 29 points on 9 of 12 shooting with a 10 of 11 mark from the foul line and a team-high 7 rebounds while Garrett Sturtz added 12 points with 7 rebounds and Roman Penn chipped in 10 points to cap off the trio of double-digit scorers for Drake in the win. Noah Thomas added 9 points with a team-high 4 assists and Anthony Murphy had 8 points with 3 steals. Robbins leads Drake in scoring and rebounding with an average of 13.8 points and 6.5 rebounds per game while Penn leads the Bulldogs in assists with an average of 5.9 assists per game this season. As a team, Drake is averaging 70.3 points per game on 46.2% shooting from the field, 34.2% from behind the arc and 70.9% from the foul line this season.

The Northern Iowa Panthers will look to add to their current four-game winning streak after a 63-51 win over Valparaiso last time out. AJ Green led the Panthers with 19 points while Austin Phyfe and Isaiah Brown each had 10 points to round out the trio of double-digit scorers for UNI in the winning effort with Phyfe adding a team-high 13 rebounds while Brown shot 4 of 8 with a pair of threes and 5 rebounds. Trae Berhow added 6 points with 11 rebounds and a team-high 4 assists as well in the winning effort. Green leads Northern Iowa in scoring and assists with an average of 19.3 points and 3 assists per game while Phyfe leads the Panthers in rebounding with 7.5 rebounds per game this season. As a team, Northern Iowa is averaging 76.7 points per game on 48.4% shooting from the field, 39.5% from behind the arc and 76.6% from the foul line this season.

I completely agree with northern Iowa being favoured at home here as the Panthers are averaging 80.2 points per game and outscoring their opposition by 15.7 points per game this season. However, Drake is no pushover in these two teams have a tendency of playing each other close, as each of the last four meetings have been decided by seven points or less. The Bulldogs haven’t been great on the road, but with the conference tournament right around the corner, this is where the middle of the pack team is kind of need to step up and build confidence down the stretch. I’m not sure that Drake wins this game out right but I think the Bulldogs are more than capable of keeping this one within single digits so I’ll take a shot with Drake and the points here.