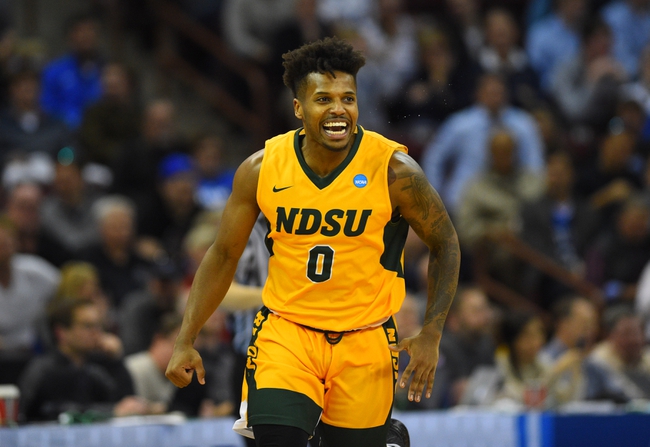 The Oral Roberts Golden Eagles will travel to the Scheels Center to take on the North Dakota State Bison this Saturday afternoon in College Basketball action.

The Oral Roberts Golden Eagles dropped to 12-11 (5-5 Summit) on the season after being defeated by the North Dakota Fighting Hawks, 74-68, this past Thursday night. Oral Roberts struggled defensively agianst the Fighting Hawks and allowed the Fighting Hawks to pull away late for the victory. Oral Roberts shot just 26.7% from beyond the arc while allowing North Dakota to shoot 48.1% from the field and 40.7% from beyond the arc in the loss. Leading the way for the Golden Eagles was Deondre Burns who had 31 points, 2 rebounds, 1 assist, 1 block, and a steal.

Defensively, Oral Roberts is allowing their opponents to average 72.2 ppg on 44.6% shooting from the field. The Golden Eagles have a rebound margin of 4.8 and a turnover margin of 2.1.

The North Dakota State Bison have won four games in a row, improving to 17-7 (8-2 Summit) overall on the season after beating the Omaha Mavericks, 86-78, this past Wednesday.  North Dakota State went into the half tied at 36 but fought their way to a nice 66-56 lead with 9:36 remaining in regulation.  The Bison held onto that lead to get the win.  North Dakota State shoe 54.2% shooting from the field including an impressive 44.0% from the three-point stripe.  Leading the way for the Bison was Jared Samuelson who had 22 points and 9 rebounds.

Defensively, the North Dakota Bison are allowing their opponents to average 65.2 ppg on 43.2% shooting from the field.  The Bison have a rebound margin of 3.8 and a turnover margin of 0.3.

Oral Roberts has been solid offensively this season, ranking 28th in scoring offense & 157th in FG%, however, the Golden Eagles have struggled a bit defensively as they currently rank 254th in scoring defense.

North Dakota State has won 6 of their last 7 games and have been decent on both ends of the court this season, ranking 118th in scoring offense & 75th in scoring defense.

Oral Roberts was able to get a 79-73 victory at home earlier this season, however, this is a team that is 0-5 ATS in their last five match-up at the Scheels Center. Oral Roberts is just 3-10 on the road this season and between the fact that Bison come in playing some of their best basketball of their season and have put up a 9-1 record at home, I think North Dakota State does enough to cover this home spread. Good Luck!