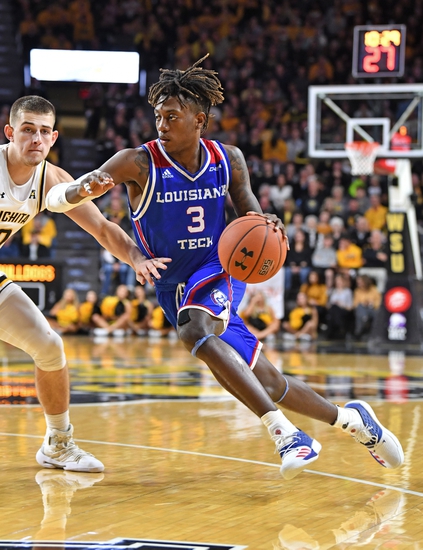 The Louisiana Tech Bulldogs will travel to the Cam Henderson Center to take on the Marshall Thundering Herd this Saturday night in College Basketball action.

The Louisiana Tech Bulldogs had their 4-game winning streak snapped and dropped to 17-6 (8-3 C-USA) on the season after being defeated by the Western Kentucky Hilltoppers, 65-54, this past Thursday night. Louisiana Tech struggled on both ends of the court in the 1st half agianst the Hilltoppers and couldn’t fight after Western Kentucky went into halftime with a 44-24 lead. Louisiana Tech shot 41.8% from the field and 31.6% from beyond the arc in the loss. Leading the way for the Bulldogs was Daquan Bracey who had 9 points, 6 rebounds, 2 assists, and 2 steals.

Defensviely, Louisiana Tech is holding their opponents to an average of 61.7 ppg on 39.1% shooting from the field. The Bulldogs have a rebound margin of 2.7 and a turnover margin of 3.0.

The Marshall Thundering Herd improved to 11-13 (5-6 C-USA) on the season after defeating the Southern Miss Golden Eagles, 72-58, this past Thursday night. Marshall allowed Southern Miss to fight back from a 35-29 halftime deficit to take a 52-45 lead midway through the 2nd half, however, Marshall was outstanding defensively the rest of the way and pulled away for the victory after holding Southern Miss scoreless over the final 6:13 of regulation. Marshall shot 40.0% from the field and won the turnover battle by a 16-9 margin in the victory. Leading the way for the Thundering Herd was Iran Bennett who had a double-double with 18 points, 12 rebounds, 1 assist, and 2 blocks.

Defensively, Marshall is allowing their opponents to average 72.3 ppg on 41.1% shooting from the field. The Thundering Herd have a rebound margin of -1.0 and a turnover margin of 0.7.

Louisiana Tech has won 6 of their last 8 games and have been solid on both ends of the court this season as they come into this match-up ranked 98th in scoring offense, 45th in FG%, and 23rd in scoring defense.

Louisiana Tech is the better overall team and although Marshall’s offense has had success putting up points, the Thundering Herd have actually haven’t shot the ball well this year as they currently rank just 125th in FG% and 331st in 3P-FG%. Marshall is just 7-6 at home this season and between the fact that Marshall has struggled at home ATS and that I think Louisiana State will have success defensively against the Marshall offense, I’m taking Louisiana Tech to cover this small road spread.