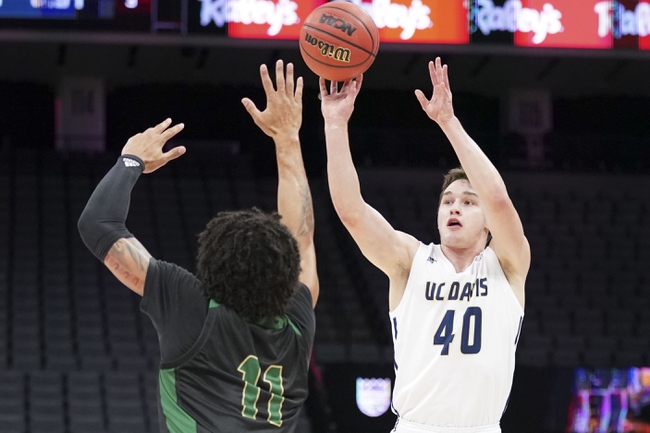 The UC Davis Aggies will travel to Titan Gym to take on the CSU Fullerton Titans this Saturday night in College Basketball action.

The UC Davis Aggies dropped to 9-15 (3-5 Big West) on the season after being defeated by the UC Irvine Anteaters, 83-72, this past Thursday night. UC Davis struggled defensively against the Anteaters and couldn’t fight back after UC Irvine took a 55-37 lead with 16:30 left in regulation. UC Davis shot 45.5% from the field, however, allowed UC Irvine to shoot 51.6% from the field and 47.6% from beyond the arc in the loss. Leading the way for the Aggies was Elijah Pepper who had 12 points, 5 rebounds, 3 assists, 1 block, and 4 steals.

Defensively, UC Davis is allowing their opponents to average 70.5 ppg on 45.4% shooting from the field. The Aggies have a rebound margin of -2.9 and a turnover margin of 1.5.

The CSU Fullerton Titans won their last game, improving to 9-15 (4-5 Big West) on the season after defeating the UC Riverside Highlanders 61-48 this past Wednesday.  CSU Fullerton took a 32-27 lead into halftime against the Highlanders and rode a strong second half to the victory, mounting a 55-41 lead with just 4:30 remaining in regulation.  The Titans shot 48.0% from the field and 42.9% from the three-point line.  Leading the way for CSU Fullerton was Brandon Kamga who had 19 points, 3 rebound and 2 steals.

Defensively, CSU Fullerton is allowing their opponents to average 69.0 ppg on 43.9% shooting from the field.  The Titans have a rebound margin of -3.6 and a turnover margin of 0.7.

UC Davis comes into this game led by their offense which currently ranks 169th in scoring offense, 100th in FG%, and 30th in 3P-FG%.

CSU Fullerton comes into this match-up ranked 293rd in scoring offense, 237th in FG%, and 172nd in scoring defense.

UC Davis comes into this game, losing 4 of their last 5 games, however, I’m not sold on the idea that CSU Fullerton, which is just 4-6 at home this season, is giving points. UC Davis has had a tough year, however, as I think their offense will be able to find some success against the Titans defense that ranks just 231st in defensive FG%, I’m taking UC Davis and the points. Good Luck!