The Saint Peter’s Peacocks and the Marist Red Foxes meet in college basketball action from McCann Arena on Friday.

Saint Peter’s comes in here at 10-10 this year. The Peacocks have won four straight games, taking out Niagara, Monmouth, Manhattan and Siena during that stretch of outings. 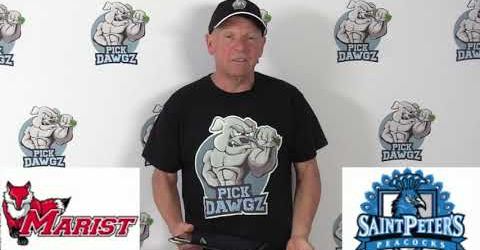 In the win over the Saints, the Peacocks were led by Aaron Estrada with 17 points, three assists and two rebounds. KC Ndefo added 15 points with six rebounds tehre, and Hassan Drame had 12 points, five rebounds and two assists.

Over on the Marist side, they’re 5-15 this year. The Foxes are 3-2 in their last five games, beating Iona, Manhattan and Niagara while falling to Siena and Canisius in that time.

In the loss to the Griffins, Marist’s Michael Cubbage led the team on 16 points with eight assists and seven rebounds. Tyler Saint-Furcy added 13 points with three rebounds and two assists, and Zion Tordoff had 12 points with one rebound.

Saint Peter’s had a nice 50-point second half against Siena, and they got some nice bench scoring to help carry them to the victory there. That makes 155 combined points across the last two games for the Peacocks.

As for Marist, they had some solid offensive output going there for a couple of games but they’ve tapered off scoring-wise over their last three. I’m not thrilled about the Foxes right now so Saint Peter’s seems the better cover play here.