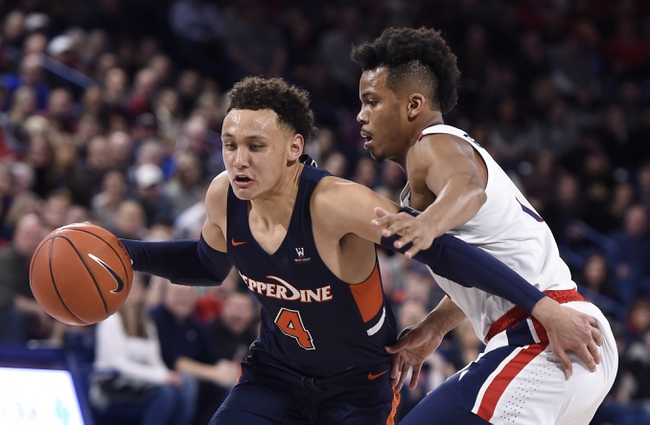 Where to Watch: WCC.tv Stream College Basketball all season on ESPN+. Sign up now!

The Santa Clara Broncos and the Pepperdine Waves meet in WCC college basketball action from the Firestone Fieldhouse on Thursday night.

The Santa Clara Broncos will look to find some consistency after alternating wins and losses in each of their last nine games following an 85-61 win over Portland last time out. Keshawn Justice led the Broncos with 17 points on 6 of 7 shooting with 5 threes and 5 rebounds while Jaden Bediako added 13 points with a team-high 9 rebounds. DJ Mitchell and Tahj Eaddy each had 12 points with Mitchell adding 7 rebounds while Eaddy shot 4 of 7 with a pair of threes and 4 assists. Trey Wertz added 11 points with 3 threes and a team-high 9 assists to round out the group of double-digit scorers for Santa Clara in the winning effort. Wertz leads Santa Clara in scoring and assists with an average of 12.5 points and 4 assists per game while Guglielmo Caruso leads the Broncos in rebounding with 5.5 rebounds per game this season. As a team, Santa Clara is averaging 77.4 points per game on 47% shooting from the field, 35.9% from behind the arc and 74.4% from the foul line this season.

The Pepperdine Waves will look to build on a 68-67 overtime win over Loyola Marymount last time out. Kameron Edwards led the Waves with 27 points on 11 of 17 shooting while Kessler Edwards added 17 points on 5 of 10 shooting with 3 threes as the only other double-digit scorer for Pepperdine in the winning effort. Colbey Ross matched his 7 points with a team-high 7 assists and a pair of steals in the victory. Ross leads the Waves in scoring and assists with an average of 19.2 points and 7.3 assists per game while Kessler Edwards leads Pepperdine in rebounding with 7.4 rebounds per game this season. As a team, Pepperdine is averaging 76.8 points per game on 43.5% shooting from the field, 35.7% from behind the 3-point line and 80.2% from the foul line this season.

I understand Pepperdine being favored at home where they play some of their best ball and average 75 points per game this season. However, Pepperdine hasn’t been good against the number at home this season, and the Waves have been porous defensively, allowing 77.7 points per game this season. Both teams are strong offensively, but the Broncos are the better defensive team and getting a free point with the Broncos feels like a gift so I’ll take Santa Clara and the points here.