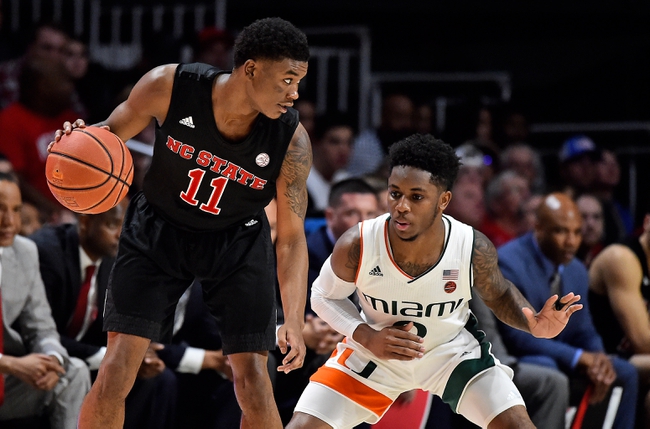 The NC State Wolfpack and the Miami Hurricanes meet in ACC college basketball action from the Watsco Center on Wednesday night.

The NC State Wolfpack will be out to snap a three-game losing streak after a 77-57 loss to Louisville last time out. C.J. Bryce led the Wolfpack with 15 points on 6 of 14 shooting while Devon Daniels added 12 points with 5 rebounds and DJ Funderburk added 11 points with a team-high 8 rebounds and 3 blocks to finish off the trio of double-digit scorers for NC State in the losing effort. Markell Johnson added 8 points with 5 rebounds, 5 assists and 4 steals as well in the defeat. Bryce leads the Wolfpack in scoring with an average of 13.2 points per game while Funderburk leads NC State in rebounding with 6.1 rebounds per game and Johnson leads NC State in assists with 2 assists per game this season. As a team, NC State is averaging 74 points per game on 44.3% shooting from the field, 31.4% from behind the arc and 70.7% from the foul line this season.

The Miami Hurricanes will look to rebound from a 62-57 loss to Pitt last time out. Rodney Miller Jr. led the Hurricanes with 16 points on 6 of 9 shooting with a pair of steals while Isaiah Wong added 15 points on 5 of 6 shooting with a pair of threes. Harlond Beverly added 11 points with 6 rebounds while Dejan Vasiljevic added 10 points with a team-high 9 rebounds to finish off the scoring in double figures for Miami in the losing effort. Chris Lykes missed the game but still leads the Hurricanes in scoring and assists with an average of 15.7 points and 2.8 assists per game while Sam Waardenburg leads Miami in rebounding with 6.4 rebounds per game this season. As a team, Miami is averaging 71 points per game on 44% shooting from the field, 33.6% from behind the arc and 77.8% from the foul line this season.

I’m trying to find an angle that makes sense as to why NC State would be favored on the road here, but I just don’t see it. The Wolfpack haven’t been playing that much better to the point that I make the Hurricanes an underdog on their own floor. I mean Miami’s last three home games saw wins against Virginia Tech and Pit as well as taking Florida State to overtime. I just think that Miami should be favored at home here, so I’ll take Miami and the points in this one.