The Northern Arizona Lumberjacks will look to add to their own five-game winning streak after a 77-72 win over Idaho last time out. Cameron Shelton led the Lumberjacks with 29 points on 9 of 15 shooting with a 10 of 13 mark from the foul line and 7 rebounds. Brooks DeBisschop and Cameron Satterwhite each had 12 points with DeBisschop adding 14 rebounds and 5 assists for the double-double while Luke Avdalovic added 10 points to finish off the scoring in double figures for NAU in the win. Shelton leads Northern Arizona in scoring and assists with an average of 13.7 points and 4.1 assists per game while DeBisschop leads the Lumberhacks in rebounding with 7.8 rebounds per game this season. As a team, Northern Arizona is averaging 72.5 points per game on 45.3% shooting from the field, 37.7% from behind the arc and 69.8% from the foul line this season.

I’ve gone back and forth on this game, and the Eagles with the free point are tempting given how well Eastern Washington has played lately. However, Northern Arizona has been strong at home this season, and in a near pick ‘em scenario between a pair of teams on lengthy winning streaks, home court can usually be the difference and the Lumberjacks are 7-2 SU at home and are outscoring teams by 13.4 points per game at home this season. This should be a great game, but I think laying the point here with Northern Arizona in this one.

Get Premium Picks Start Winning Now »
The pick in this article is the opinion of the writer, not a PickDawgz site consensus.
Previous Pick
Delaware State vs. Maryland-Eastern Shore - 2/3/20 College Basketball Pick, Odds, and Prediction
Next Pick
Arkansas-Pine Bluff vs. Jackson State - 2/3/20 College Basketball Pick, Odds, and Prediction 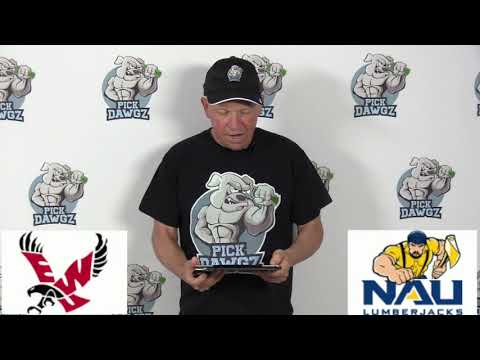