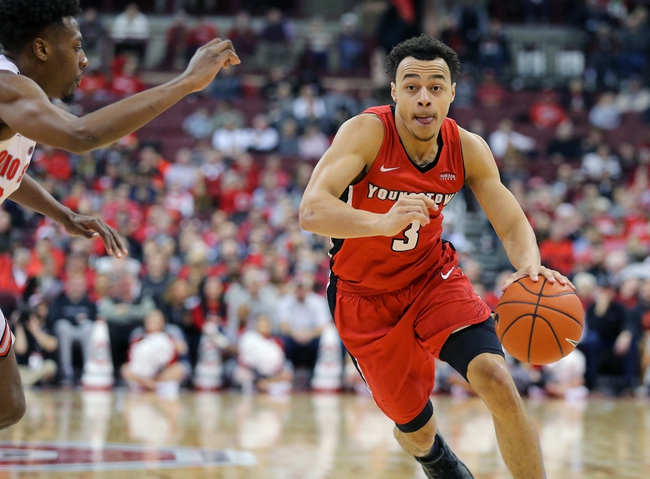 The IUPUI Jaguars will travel to the Beeghly Center to take on the Youngstown State Penguins this Saturday night in College Basketball action.

The IUPUI Jaguars dropped to 6-17 (2-8 Horizon) on the season after being defeated by the Cleveland State Vikings, 72-62, this past Thursday night. IUPUI struggled offensively in the 1st half against the Vikings and trailed throughout the 2nd half after going to halftime trailing by a 32-24 margin. IUPUI shot just 36.4% from the field and 29.2% from beyond the arc in the loss. Leading the way for the for the Jaguars was Marcus Burk who had 18 points, 6 rebounds, 2 assists, and a block.

Defensively, IUPUI is allowing their opponents to average 77.6 ppg on 45.0% shooting from the field. The Jaguars have a rebound margin of -2.0 and a turnover margin of -1.7.

The Youngstown State Penguins dropped to 12-11 (5-5 Horizon) on the season after being defeated by the UIC Flames, 90-83 in OT, this past Thursday night. Youngstown State allowed UIC to fight back from a 70-61 deficit with just 3:43 left in regulation to force OT and had no answers defensively for the Flames in the OT period. Youngstown State allowed UIC to shoot 50.7% from the field while the Penguins shot just 29.0% from beyond the arc in the loss. Leading the way for the Penguins was Naz Bohannon who had a double-double with 25 points, 10 rebounds, and 3 assists.

Defensively, Youngstown State is allowing their opponents to average 77.6 ppg on 45.0% shooting from the field. The Penguins have a rebound margin of -2.0 and a turnover margin of -1.7.

IUPUI has struggled on both ends of the court this season and currently rank 244th in scoring offense, 295th in FG%, and 331st in scoring defense.

Youngstown State hasn’t been anything more than average this season as the Penguins come into this game ranked just 145th in scoring offense, 281st in FG%, and 245th in scoring defense.

Youngstown State has been an impressive 9-3 at home this season which included a competitive loss agianst the West Virginia Mountaineers and between the fact that the Penguins are 5-0 ATS against IUPUI in their last five games and should have no problems putting up plenty of points against the Jaguars defense, I’m taking Youngstown State to cover this large home spread. Good Luck!