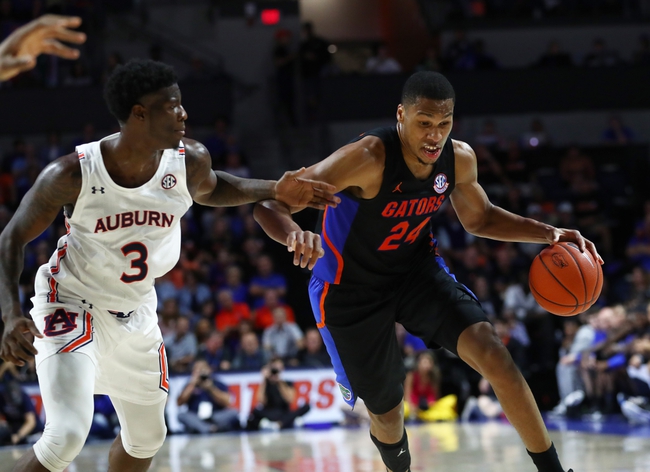 The Florida Gators will travel to Memorial Gymnasium (Vanderbilt) to take on the Vanderbilt Commodores this Saturday night in College Basketball action.

The Florida Gators have lost three games in a row and dropped to 12-8 (4-3 SEC) on the season after being defeated by the Mississippi State Bulldogs, 78-71, this past Tuesday.  Florida came out strong and led throughout most of the game, taking a 45-35 lead into halftime.  However, Mississippi kept fighting and when the Bulldogs finally grabbed the lead, 59-58, with 8:58 remaining in regulation, Mississippi State never gave it up.  The Gators struggled defensively, allowing 53.8% shooting from the field and 58.3% from beyond the arc.  Leading the way for Florida was Scottie Lewis who had 17 points and 3 steals to go along with a rebound and an assist.

Defensively, Florida is allowing their opponents to average 67.2 ppg on 41.0% shooting from the field.  The Gators have a rebound margin of 3.4 and a turnover margin of 1.3.

The Vanderbilt Commodores are on an eight game losing streak and dropped to 8-12 (0-7 SEC) on the season after being defeated by the Kentucky Wildcats, 71-62, this past Wednesday.  Vanderbilt came to play and took a surprising 35-28 lead into the half, however, Kentucky proved to be too much with an excellent second half offensively, and took the lead for good with 8:32 left in regulation. The Commodores shot 38.9% from the field and 34.6% from beyond the arc in the loss. Leading the way for Vanderbilt was Saben Lee who had 21 points, 4 assists, 2 rebounds and a steal.

Defensively, Vanderbilt is allowing their opponents to average 73.8 ppg on 46.4% shooting from the field.  The Commodores have a rebound margin of -3.3 and a turnover margin of 1.4

Florida is a balanced team that comes into this match-up ranked 125th in scoring offense, 120th in scoring defense, and 95th in defensive FG%.

Vanderbilt has struggled on both ends of the court this season and currently rank just 279th in scoring defense, 320th in defensive FG%, and 223rd in FG%.

Vanderbilt has an encouraging performance in their recent game agianst Kentucky however, I’m not buying into that much as this is the same Commodores team that has lost 10 of their last 12 games and currently are just 8-11-1 ATS on the season. Florida is a solid team that has been solid ATS on the road as of late and as I think their defense is going to give a Commodores team that has really struggled scoring the ball during their 8-game losing streak, I’m taking Florida to cover this double-digit road spread. Good Luck!