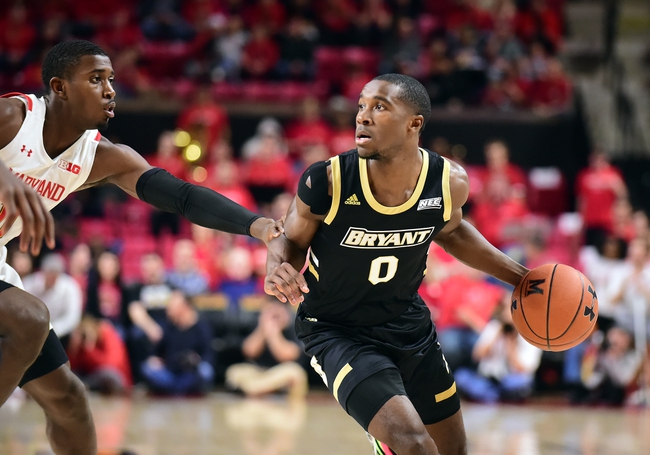 The Bryant Bulldogs will travel to DeGol Arena to take on the St. Francis (PA) Red Flash this Saturday afternoon in College Basketball action.

The Bryant Bulldogs lost their 2nd straight game and dropped to 10-11 (2-6 NEC) on the season after being defeated by the Robert Morris Colonials, 64-54, this past Thursday night. Bryant struggled offensively agianst Robert Morris and couldn’t fight back after the Colonials took a 53-41 lead with 8:59 left in regulation. Bryant shot just 28.8% from the field and 25.0% from beyond the arc in the loss. Leading the way for the Bulldogs was Adam Grant who had 11 points, 8 rebounds, and 2 assists.

Defensively, Bryant is allowing their opponents to average 68.6 ppg on 40.6% shooting from the field. The Bulldogs have a rebound margin of 3.2 and a turnover margin of 1.6.

The St. Francis (PA) Red Flash snapped their 3-game losing streak and improved to 13-8 (6-4 NEC) on the season after defeating the Central Connecticut Blue Devils, 84-77, this past Thursday night. St. Francis (PA) went into halftime trailing by a 49-29 margin, however, the Flash used a 19-0 run early in the 2nd half to fight back into the game and pulled away late to secure the come from behind victory. St. Francis (PA)  shot 46.2% from the field and outrebounded Central Connecticut by a 43-30 margin in the victory. Leading the way for the Red Flash was Isaiah Blackmon who had a double-double with 18 points, 10 rebounds, 3 assist, 1 block, and a steal.

Defensively, St. Francis (PA) is allowing their opponents to average 73.9 ppg on 45.6% shooting from the field. The Red Flash have a rebound margin of 3.2 and a turnover margin of 1.6.

Bryant comes into this game ranked 168th in scoring offense, 25th in three-pointers made per game, and 80th in defensive FG%.

St. Francis (PA) has been led by their offense that ranks 36th in scoring offense and 63rd in FG%, however, the Red Flash have struggled defensively as they come into this game ranked just 284th in scoring defense & 303rd in defensive FG%.

Bryant comes into this game losing 6 of their last 7 games, however the Bulldogs did defeat St. Francis (PA) earlier this season by a 67-63 margin. St. Francis (PA) was able to fight back to avoid an embarrassing loss to the 2-21 Central Connecticut Blue Devils, however, it’s a bit concerning that the Red Flash went down by a 49-29 margin at home against a Blue Devils team that ranks just 337th in scoring offense and T-334th in scoring defense. Bryant strength is on the defensive end and as I think they’ll once again have success in holding St. Francis (PA) to under their season scoring average, I think Bryant will keep this one to at worst cover with the points. Good Luck!