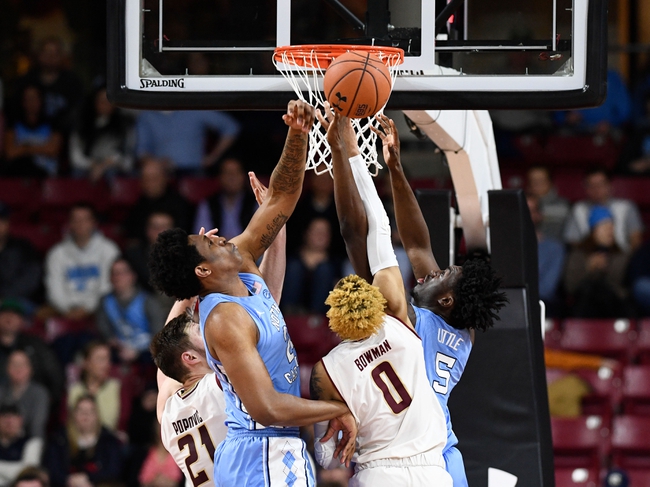 The Boston College Eagles could use a big road win after losing 5 of their last 6 games following an 86-69 loss to Louisville last time out. Derryck Thornton led the Eagles with 17 points along with a team-high 4 assists while Jay Heath came right behind with 16 points on 5 of 11 shooting with 4 threes and Jairus Hamilton added 13 points to finish off the trio of double-digit scorers for BC in the losing effort. Steffon Mitchell added 6 points with a team-high 9 rebounds as well in the loss for the Eagles as well. Thornton leads Boston College in scoring and assists with an average of 12.6 points and 3.6 assists per game while Mitchell leads the Eagles in rebounding with 8.3 rebounds per game this season. As a team, Boston College is averaging 64.5 points per game on 40.2% shooting from the field, 29.9% from behind the arc and 64.6% from the foul line this season.

The North Carolina Tar Heels will look to build on back-to-back wins after a 75-65 win over NC State last time out. Garrison Brooks led the Tar Heels with 25 points on 11 of 20 shooting with 11 rebounds for the double-double while Armando Bacot, Leaky Black and Brandon Robinson each had 11 points to round out the group of double-digit scorers for UNC in the win with Bacot adding 11 rebounds, 3 assists and a pair of steals for his double-double while Black had 8 rebounds and Robinson added 6 rebounds with a 7 of 7 mark from the foul line. Cole Anthony is questionable for this game and his appearance would be big as he remains UNC’s leading scorer and assist man with an average of 19.1 points and 3.6 assists per game while Brooks leads the Tar Heels in rebounding with 9.3 rebounds per game this season. As a team, North Carolina is averaging 71.6 points per game on 41.6% shooting from the field, 30% from behind the arc and 65.2% from the foul line this season.

UNC isn’t a team I’ve been looking to back much lately, but this is the game where the Tar Heels are finally expected to get Cole Anthony back and while inserting a returning player can sometimes cause chemistry issues, I think the Tar Heels have been waiting for him to come back and will be pumped to get back to business. I’ll lay the points with North Carolina here as I just don’t think Boston College can keep up here.