The Rutgers Scarlet Knights will look to build on back-to-back wins after a 70-63 win over Purdue in their last outing. Caleb McConnell led the Scarlet Knights with 16 points including a 12 of 13 mark from the foul line as well as a team-high 7 rebounds while Akwasi Yeboah, Ron Harper Jr. and Geo Baker each had 10 points to round out the group of double-digit scorers for Rutgers in the winning effort. Myles Johnson added 7 points with 7 rebounds, a pair of steals and a pair of blocks as well in the winning effort for Rutgers. Harper Jr. leads Rutgers in scoring with an average of 12 points per game while Johnson leads the Scarlet Knights in rebounding with 8 rebounds per game and Baker leads Rutgers in assists with 3.6 assists per game this season. As a team, Rutgers is averaging 71.6 points per game on 45.9% shooting from the field, 30.9% from behind the arc and 64.6% from the foul line this season.

The Michigan Wolverines will look to build on a 79-68 win over Nebraska that snapped a four-game losing streak. Eli Brooks led the way with 20 points on 6 of 12 shooting with 4 threes, 9 rebounds and 4 assists while Franz Wagner added 18 points with 8 rebounds and 3 steals and Brandon Johns Jr. added 16 points with 7 rebounds to round out the trio of double-digit scorers for Michigan in the winning effort. Jon Teske added 9 points with 8 rebounds as well in the win but still leads Michigan in scoring and rebounding with an average of 13.7 points and 7.7 rebounds while Zavier Simpson leads the Wolverines in assists with 8.3 assists per game this season. As a team, Michigan is averaging 76.7 points per game on 46.9% shooting from the field, 34.2% from behind the 3-point line and 70.7% from the foul line this season.

If this game was in Ann Arbor, I’d be a lot more inclined to give Michigan the benefit of the doubt as the home dominance has been the story of Big Ten conference play this season. However, the Wolverines have struggled lately, and while Michigan has excelled in neutral site scenarios this season, the consistency hasn’t translated to conference play. This is the best that I can remember Rutgers playing in some time, and I think the Scarlet Knights will be up for this one, so I’ll take the Scarlet Knights and the free point in a game I see Rutgers winning outright. 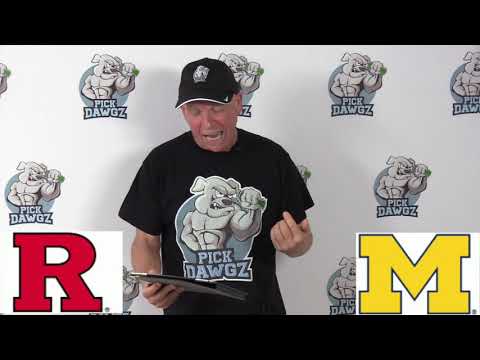