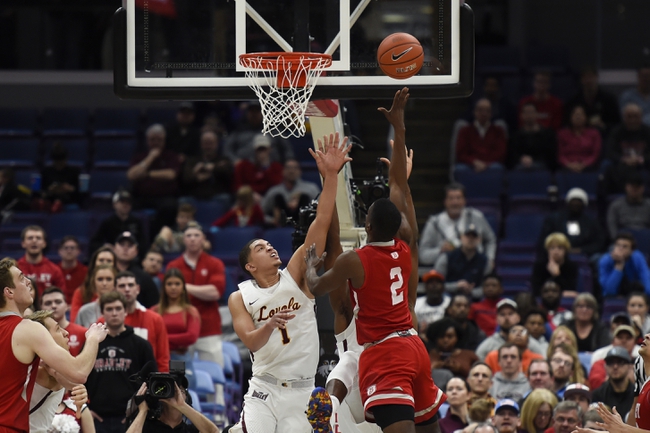 The Bradley Braves and the Loyola-Chicago Ramblers meet in MVC college basketball action from the Joseph J. Gentile Center on Saturday night.

The Bradley Braves will look to find some consistency after alternating wins and losses in each of their last 5 games following an 80-69 win over Valparaiso in their last outing. Jashon Henry led the Braves with 21 points on 7 of 9 shooting with 9 rebounds while Darrell Brown had 17 points with a team-high 5 assists and Nate Kennell added 15 points on 5 of 10 shooting with 3 threes, 8 rebounds and 3 assists. Koch Bar added 11 points with 10 rebounds for the double-double while Ville Tahvanainen added 10 points to finish off the scoring in double figures for Bradley in the victory. Brown leads Bradley in scoring and assists with an average of 14.3 points and 4.9 assists per game while Elijah Childs leads the Braves in rebounding with 9.1 rebounds per game this season. As a team, Bradley is averaging 72.5 points per game on 43.9% shooting from the field, 38.2% from behind the arc and 72.7% from the foul line this season.

The Loyola-Chicago Ramblers will look to rebound from back-to-back losses after a 68-63 loss to Southern Illinois in their last outing. Marquise Kennedy led the Ramblers with 18 points on 8 of 11 shooting while Cameron Krutwig added 15 points on 7 of 12 shooting with team-highs of 7 rebounds and 5 assists. Keith Clemons added 10 points to cap off the trio of double-digit scorers for the Ramblers in the losing effort. Krutwig leads the Ramblers with an average of 15.2 points, 8.3 rebounds and 4.5 assists per game this season. As a team, Loyola-Chicago is averaging 69.2 points per game on 50.6% shooting from the field, 36.5% from behind the arc and 68.1% from the foul line this season.

I get Loyola being favored at home, but the problem for me is that the Ramblers have stumbled lately, as the loss to Northern Iowa was understandable but slipping up against Southern Illinois was a bit of a headscratcher. Bradley has been playing the better basketball for the bulk of the season and have been really solid over the last ten games, going 8-2 SU and 7-3 ATS while the Ramblers are sub-.500 ATS over that same stretch. I can easily see this game coming down to the wire, but I’ll take Bradley and the points to be safe.