The Texas Tech Red Raiders will travel to Allen Fieldhouse to take on the 3rd ranked Kansas Jayhawks this Saturday afternoon in College Basketball action.

The Texas Tech Red Raiders are coming off a big win, improving to 13-7 (4-3 Big 12) on the season after knocking off the 12th ranked West Virginia Mountaineers, 89-81, this past Wednesday.  Texas Tech went into halftime with a 42-38 lead and continued to outpace West Virginia in the second half with a strong offensive performance.  The Red Raiders were able to hold on to the comfortable lead they built after TJ Holyfield dropped a three to go up 70-55 with 10:40 remaining in the second half.  Texas Tech shot 54.3% from the field including a stellar 64.7% from beyond the arc.  Leading the way for the Red Raiders was Davide Moretti who had 25 points, 2 assists, 2 steals, and a rebound.

Defensively, Texas Tech is holding their opponents to an average of 63.5 ppg on 40.1% shooting from the field.  The Red Raiders have a rebound margin of 2.1 and a turnover margin of 2.1.

The 3rd ranked Kansas Jayhawks are riding a 5-game winning streak and improved to 17-3 (6-1 Big 12) on the season after defeating the Oklahoma State Cowboys, 65-50, this past Monday night.  Kansas only held a 29-24 lead after the first half, however the Jayhawks were excellent in the second half on both ends of the floor and cruised to an easy win after they jumped out to a 49-29 lead with 11:37 left in regulation.  Kansas held Oklahoma State to only 28.1% shooting from the field and 11.1% from beyond the arc in the victory.  Leading the way for the Jayhawks was Christian Braun who had 16 points, 9 boards, 2 steals and a block.

Defensively, Kansas is holding their opponents to an average of 60.4 ppg on 37.3% shooting from the field.  The Jayhawks have a rebound margin of 6.3 and a turnover margin of 0.8.

Kansas has been outstanding on both ends of the ball this season and currently rank 68th in scoring offense, 12th in scoring defense, and 11th in defensive FG%.

Texas Tech is not as strong of a team that we saw reach the National Championship, however, the Red Raiders still have top-25 level talent and once against have an outstanding defense that helped them pick up impressive wins against Louisville & West Virginia this season. Kansas has won 8 of their last 9 games and always is a tough team to play at Allen Fieldhouse, however, Texas Tech has the defense that I think will be able to keep this one somewhat close and I just think this is to many points to pass up on with the Red Raiders. Take Texas Tech to cover! 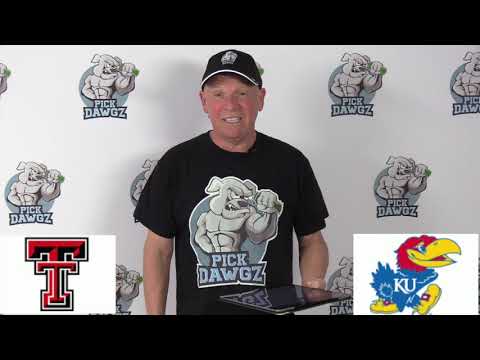