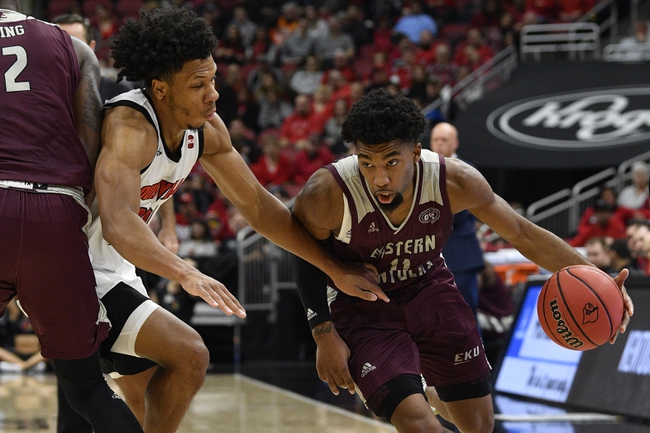 The SE Missouri State Redhawks will travel to McBrayer Arena to take on the Eastern Kentucky Colonels this Saturday afternoon in College Basketball action.

The SE Missouri State Redhawks lost their 9th consecutive game and dropped to 4-18 (0-9 OVC) on the season after being defeated by the Morehead State Eagles, 90-74, this past Thursday. SE Missouri State had no answers on the defensive end for the Eagles and couldn’t make a run in the 2nd half after going into halftime trailing by a 48-36 margin. SE Missouri State allowed Morehead State to shoot 50.8% from the field and was outrebounded by the Eagles by a 37-27 margin in the loss. Leading the way for the Redhawks was Alex Caldwell who had 29 points, 5 rebounds, and an assist.

Defensively, SE Missouri State is allowing their opponents to average 75.7 ppg on 48.9% shooting from the field. The Redhawks have a rebound margin of -4.0 and a turnover margin of -0.4.

The Eastern Kentucky Colonels won their 4th straight game and improved to 10-12 (7-2 OVC) on the season after defeating the UT-Martin Skyhawks, 99-86, this past Thursday night. Eastern Kentucky was able to get whatever they wanted offensively against the UT-Martin defense and had no trouble securing the victory after going into halftime with a 57-37 lead. Eastern Kentucky shot 51.5% from the field and forced the Skyhawks into committing 21 turnovers in the victory. Leading the way for the Colonels was Tre King who had 22 points, 5 rebounds, 4 assists, 1 block, and 5 steals.

Defensively, Eastern Kentucky is allowing their opponents to average 77.1 ppg on 46.4% shooting from the field. The Colonels have a rebound margin of -7.3 and a turnover margin of 4.6.

SE Missouri State has really struggled on both ends of the court this season and come into this game ranked just 308th in scoring offense, T-307th in scoring defense, and 346th in defensive FG%.

Eastern Kentucky likes to keep the game at a fast pace and although their defense ranks just 327th in scoring defense and 321st in defensive FG%, the Colonels have been able to put points up on the board as they rank 74th in scoring offense and T-61st in three-pointers made per game.

Eastern Kentucky has won 6 of their last 7 games and have owned dominated this series as of late, winning 9 of their last 10 match-ups and SE Missouri State comes into this game 0-12 on the road this season, I think the Colonials offense will do enough in this one to cover this mid-range spread. Good Luck.