The Arkansas Razorbacks will travel to Coleman Coliseum to take on the Alabama Crimson Tide this Sunday night in College Basketball action.

The Arkansas Razorbacks dropped to 15-5 (3-4 SEC) on the season after a tough loss to the South Carolina Gamecocks this past Wednesday.  Arkansas was down 34-38 at the half and rallied to pull within one point at 78-77 with :28 left in regulation but weren’t able to complete the comeback after their three point attempt at the buzzer missed the mark.  The Razorbacks shot 40.7% from the field and 26.9% from beyond the arc in the loss. Leading the way for Arkansas was Mason Jones who had a double-double with 34 points, 12 rebounds, 4 assists and a steal.

Defensively, Arkansas is holding their opponents to 64.0 ppg on 40.5% shooting from the field.  The Razorbacks have a rebound margin of -5.3 and a turnover margin of 5.1.

The Alabama Crimson Tide saw their four game winning streak snapped, dropping to 12-8 (4-3 SEC) on the season after being defeated by the LSU Tigers this past Wednesday.  The Crimson Tide kept it close early, but LSU was able to open up a 43-25 lead with 5:47 left in the first half and kept a comfortable lead for the rest of the game.  Alabama shot 41.1% from the field and 26.3% from beyond the arc in the loss.  Leading the way for the Crimson Tide was Jaden Shackelford who had 21 points, 3 rebounds and an assist.

Defensively, Alabama is allowing their opponents to score 77.3 ppg on 40.5% shooting.  The Crimson Tide have a rebound margin of 1.3 and a turnover margin of -1.4.

Arkansas come into this game ranked 106th in scoring offense, 57th in scoring defense, and 72nd in defensive FG%.

Alabama has struggled defensively this season as the Crimson Tide rank just 329th in scoring defense, however, Alabama has been outstanding offensively as they currently rank 5th in scoring offense and 7th in three-pointers made per game.

Looking at the latest injury reports, it seems that the Arkansas is hopeful that Isaiah Joe, Desi Sills, and Jimmy Whitt Jr. will all be able to give it a go today, however, it sounds like even if they do, they might not be at 100%. If Arkansas was fully healthy I think their the better team, however, Alabama is not that far behind the talent level of the Razorbacks and between the fact that the Crimson Tide has been solid at home and that this line is a bit lower than I expected, I'm taking Alabama to cover. Good Luck! 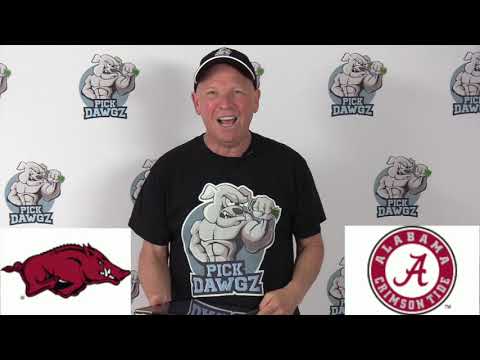