The Oakland Golden Grizzlies and the Detroit Titans meet in college basketball action from Calihan Hall on Friday.

Oakland sits at 7-15 on the year. The Grizzlies have lost their last four straight games, falling to Green Bay, Milwaukee, UIC and IUPUI in succession during that stretch of outings.

In the loss to the Jaguars, Oakland’s Xavier Hill-Mais led the way on 20 points with eight rebounds. Rashad Williams added 18 points there, and Brad Brechting doubled up with 10 points and 13 boards.

Over on the Detroit side, they’re 6-16 this year. The Titans are 3-1 in their last four games, falling to Green Bay while otherwise beating Milwaukee, IUPUI and UIC during that time.

In the win over the Flames, Detroit’s top scorer was Marquis Moore with 16 points, seven rebounds and two assists. Chris Brandon added 15 points and eight rebounds there, and Antoine Davis had 13 points.

Oakland’s scoring has been pretty spotty lately, hence the bad record over their last 10 games or so. The Grizzlies put up 85 points versus IUPUI but prior to that hadn’t hit 70 points in seven straight outings.

As for Detroit, they had some offensive issues themselves a while back but they’re getting better lately. The Titans have hit at least 70 points in each of their last four games. All things considered here, I feel like Detroit is the better play. 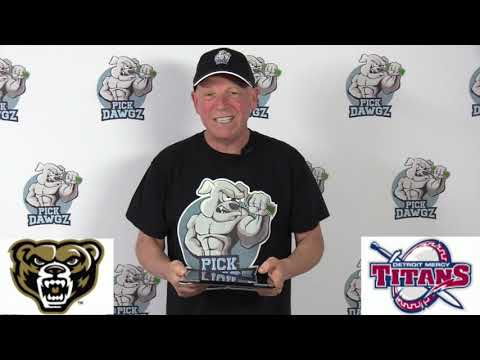