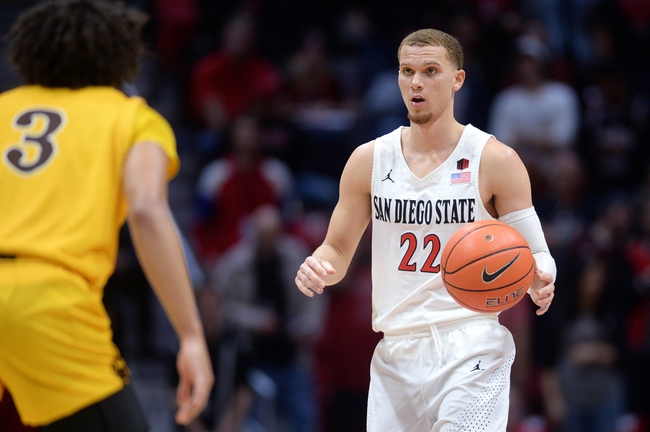 The San Diego State Aztecs wjll look to remain unbeaten after improving to 21-0 on the year with a 71-67 win over UNLV last time out. Malachi Flynn led the Aztecs with 21 points while Trey Pulliam added 18 points on a perfect 6 of 6 shooting with a pair of threes. Jordan Schakel added 11 points on 4 of 10 shooting with 3 threes to round out the trio of double-digit scorers for San Diego State in the win while Yanni Wetzell added 8 points with a team-high 8 rebounds and 4 assists. Flynn leads San Diego State in scoring and assists with an average of 16.8 points and 4.9 assists per game while Nathan Mensah leads the Aztecs in rebounding with 6.8 rebounds per game this season. As a team, San Diego State is averaging 74.5 points per game on 46.5% shooting from the field, 37.2% from behind the arc and 75.8% from the foul line this season. The Aztecs also own a top-5 defense, allowing just 57.2 points per game on 37% shooting from the field and 27.5% from 3-point range this season.

The New Mexico Lobos will look to rebound after losing 3 of their last 4 games following a 96-74 loss to Nevada last time out. Zane Martin led the Lobos with 23 points on 8 of 19 shooting with 3 threes and a team-high 4 assists and a pair of steals while Vante Hendrix added 19 points on 6 of 12 shooting with 3 threes. Corey Manigault added 13 points with 5 rebounds and Keith McGee added 11 points on 4 of 6 shooting with 3 threes to round out the group of double-digit scorers for New Mexico in the losing effort. Makuach Maluach added a team-high 8 rebounds as well in the defeat. JaQuan Lyle missed the last game with a knee injury but still leads New Mexico in scoring with an average of 17.1 points per game while Corey Manigault leads the Lobos in rebounding with 4.9 rebounds per game this season. As a team, New Mexico is averaging 80 points per game on 49.4% shooting from the field, 33.7% from behind the arc and 71.8% from the foul line this season.

This many points with the Lobos at home is definitely worth a look as New Mexico has been solid offensively, and the lines are starting to get to a point where the Aztecs aren’t able to cover them, as talented as the Aztecs are. However, the Lobos have been hemorrhaging points left and right in their last few games, and defensive miscues like that won’t cut it against a San Diego State team that can suffocate you with their defense. There’s also a good chance the Lobos miss their leading scorer JaQuan Lyle for this one, and that would be a huge blow and even if he goes here, you can’t think that he’ll be at 100% here. I just think this is a game where San Diego State makes a statement, so I’ll lay the points with San Diego State here.