The South Carolina Gamecocks will look to build on a 90-64 win over Vanderbilt last time out. Justin Minaya and A.J. Lawson added 14 points each with Minaya logging 12 rebounds and 4 assists for the double-double while Lawson shot 6 of 11 with a pair of threes. Alanzo Frink and Jair Bolden each had 13 points with Bolden shooting 5 of 10 with 3 threes and Frink shooting 4 of 5 from the floor. Jalyn McCreary added 11 points with 5 rebounds to cap off the scoring in double figures in the winning effort while Trae Hannibal added a team-high 5 assists and 3 steals. Lawson leads South Carolina in scoring with an average of 13.7 points per game while Minaya leads the Gamecocks in rebounding with 6.3 rebounds per game and Jermaine Couisnard leads South Carolina in assists with 2.6 assists per game this season. As a team, South Carolina is averaging 70.8 points per game on 43.6% shooting from the field, 31.1% from behind the arc and 61.2% from the foul line this season.

The Arkansas Razorbacks will look to add to a 78-67 win in their last outing over TCU. Mason Jones and Jimmy Whitt Jr. each had 20 points with Jones adding a 10 of 15 mark from the foul line in addition to 5 rebounds and 4 assists while Whitt Jr. shot 8 of 15. Desi Sills added 18 poinys on 7 of 8 shooting with 3 triples to round out the trio of double-digit scorers for Arkansas in the win. Jalen Harris added 7 points with a team-high 6 assists while Adrio Bailey added 7 points with a team-high 6 rebounds. Jones leads Arkansas with an average of 18.4 points per game, 6.1 rebounds and 3.6 assists per contest this season. As a team, South Carolina is averaging 74.1 points per game on 44.5% shooting from the field, 31.4% from behind the arc and 73.7% from the foul line this season.

I get Arkansas being favored here as the Razorbacks have probably been the better team overall over the course of the year when you put the win-loss record aside. However, South Carolina has stepped up their play lately, especially on the road where the Gamecocks have actually gone 4-2 SU and have outright wins over Virginia and Clemson as sizeable underdogs. I like what Arkansas brings to the table but I think this is a game that the Gamecocks can keep within reach. I’ll take South Carolina and the points in this one. 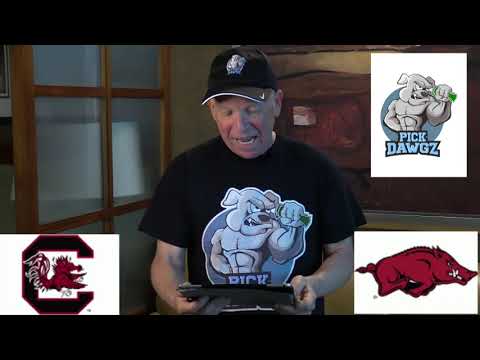