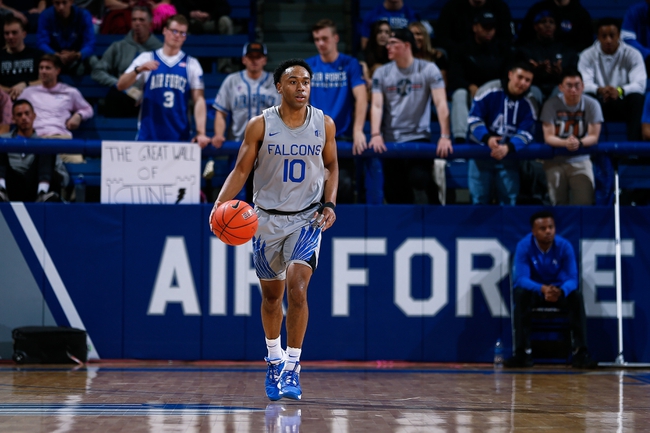 The Fresno State Bulldogs could definitely use a win after losing 7 of their last 9 games following an 87-53 loss to Boise State in their last outing. Noah Blackwell led the Bulldogs with 14 points on 5 of 7 shooting with 4 threes as the lone double-digit scorer for Fresno State in the losing effort. Orlando Robinson added 8 points with a team-high 5 rebounds, a pair of steals and 3 blocks while Aguir Agau added 6 points with 5 rebounds of his own. Robinson leads Fresno State in scoring with an average of 12.9 points per game while Nate Grimes leads the Bulldogs in rebounding with 9.5 rebounds per game and Mustafa Lawrence leads Fresno State in assists with 3.1 assists per game this season. As a team, Fresno State is averaging 67.7 points per game on 41.1% shooting from the field, 32.3% from behind the arc and 70.5% from the foul line this season.

The Air Force Falcons will be out to snap a three-game losing streak after a 90-81 loss to San Jose State last time out. Lavelle Scottie led the Falcons with 25 points on 11 of 21 shooting with 6 rebounds and 5 assists while Caleb Morris added 13 points with 4 threes and a team-high 6 assists. Chris Joyce added 12 points coming on 4 threes as well and A.J. Walker added 3 threes as part of his 10-point night with 5 assists to finish off the scoring in double figures for Air Force. Sid Tomes added 6 points with a team-high 7 rebounds and 5 assists while Ryan Swan chipped in 8 points with 7 boards of his own. Scottie leads Air Force in scoring and rebounding with an average of 15.5 points and 5.5 rebounds per game while Walker leads the Falcons in assists with 2.7 assists per game this season. As a team, Air Force is averaging 75.5 points per game on 46.5% shooting from the field, 38.7% from behind the arc and 75.8% from the foul line this season.

I’ve thought for some time now that it’s time to face reality, and that reality is that the Fresno State Bulldogs are a bad team this year and also a team that’s overhyped by a lot of folks this season. Air Force has stumbled lately in their own right, but the Falcons are one of the better offensive teams in the country and should be able to pull away from Fresno State as the game goes on so I’ll lay the points with Air Force at home here.