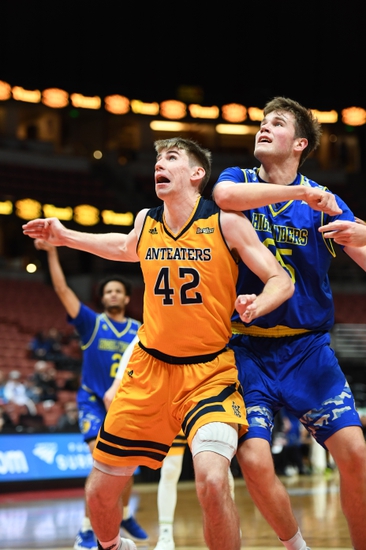 The UC Riverside Highlanders will travel to The Thunderdome to take on the UC Santa Barbara Gauchos this Saturday night in College Basketball action.

The UC Riverside Highlanders snapped their two game losing streak and improved to 13-8 (3-2 Big West) on the season after defeating the Cal Poly Mustangs, 97-64, this past Thursday night. UC Riverside has no trouble generating offense agianst Cal Poly and easily cruised to victory in the 2nd half after taking a 68-42 lead with 11:14 left in regulation. UC Riverside shot 53.6% from the field and 53.3% from beyond the arc in the victory. Leading the way for the Highlanders was Arinze Chidom who had 18 points, 9 rebounds, 2 assist, 2 blocks, and a steal.

Defensively, UC Riverside is holding their opponents to an average of 61.0 ppg on 40.6% shooting from the field. The Highlanders have a rebound margin of 7.3 and a turnover margin of -2.4.

Defensively, UC Santa Barbara is allowing their opponents to average 66.7 ppg on 44.6% shooting from the field. The Gauchos have a rebound margin of 6.4 and a turnover margin of -0.2.

UC Riverside has been led by their defense this season that ranks T-21st in scoring defense, 88th in defensive FG%, and 22nd in rebound margin, however, has struggled at times putting points up on the board as the Highlanders rank just 298th in scoring offense.

UC Santa Barbara has been decent on both sides of the ball this season as they come into this game ranked 160th in scoring offense, 114th in scoring defense, and 33rd in rebound margin.

UC Riverside has won 4 of their last 6 games and although the offensive has struggled, the Highlanders can be dangerous beyond the arc they currently rank 80th in three-pointers made per game & 88th in 3P-FG%. UC Santa Barbara is 7-3 at home this season however, the Gauchos have struggled at home as of late, losing their last two home games to Long Beach State & CSU Northridge who have a combined 15-27 record on the season. UC Santa Barbara is better team than what we’ve seen lately, however, as I think the Highlanders offense will find some success agianst the Gauchos 267th ranked defensive FG%, I think UC Riverside does enough to cover with the points in this one. Good Luck!