The Kentucky Wildcats and the Texas Tech Red Raiders meet in college basketball action from the United Supermarkets Arena on Saturday evening as part of the SEC/Big 12 Challenge.

The Kentucky Wildcats will look to keep their momentum going after winning 6 of their last 7 games with an 89-79 win over Georgia last time out. Ashton Hagans led the Wildcats with 23 points on 8 of 17 shooting with a team-high 9 assists and 4 steals while Nick Richards added 20 points on 7 of 12 shooting with a team-high 8 rebounds and 3 blocks. Immanuel Quickley added 12 points while E.J. Montgomery added 10 points to finish off the scoring in double figures for Kentucky in the winning effort. Richards leads Kentucky in scoring and rebounding with an average of 13.7 points and 7.8 rebounds per game while Hagans leads the Wildcats in assists with 7.3 assists per game this season. As a team, Kentucky is averaging 75.7 points per game on 46.4% shooting from the field, 31.6% from behind the 3-point line and 76.7% from the foul line this season.

The Texas Tech Red Raiders will look to rebound after a frustrating 65-54 loss to TCU last time out. Jahmi’us Ramsey led the Red Raiders with 15 points along with 5 rebounds while TJ Holyfield and Terrance Shannon Jr. each had 10 points to finish off the scoring in double figures in the losing effort. Chris Clarke grabbed a team-high 7 rebounds while Kyler Edwards had 9 points with a team-high 4 assists and 3 steals. Ramsey leads Texas Tech in scoring with an average of 15.5 points per game while Clarke leads the Red Raiders in rebounding and assists with an average of 7.9 rebounds and 5.6 assists per game this season. As a team, Texas Tech is averaging 72.7 points per game on 44.3% shooting from the field, 32.9% from behind the arc and 75.7% from the foul line this season.

Had Texas Tech not choked against TCU, I may have been able to make a case for Texas Tech at home with their defensive play. However, that was a tough pill for me to swallow as I had Texas Tech in that game and it just made me back off of the Red Raiders once again. Kentucky is as talented as we are used to seeing from the Wildcats and Kentucky is also picking up steam at just the right time. I wouldn’t be surprised if Texas Tech hangs but I think it’s more likely that we see a Kentucky win and cover in this one. 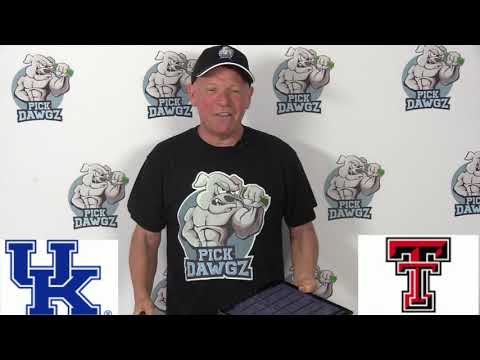